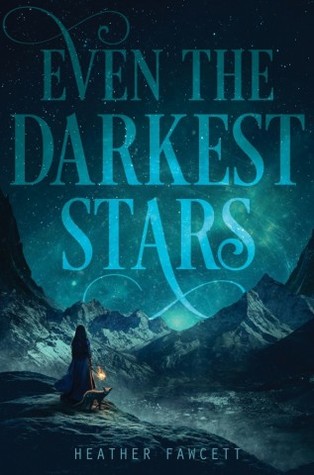 Even the Darkest Stars by Heather Fawcett
Releases on: September 5th 2017
Add on Goodreads!
Set in a fictional Himalayan kingdom, this is the story of a girl enlisted by a legendary explorer to help him climb the kingdom’s deadliest mountain – only to discover that his true mission may threaten her whole world.

Kamzin has always dreamed of becoming one of the emperor’s royal explorers, the elite climbers tasked with mapping the wintry, mountainous Empire and spying on its enemies. She knows she could be the best in the world, if only someone would give her a chance.

But everything changes when the mysterious and eccentric River Shara, the greatest explorer every known, arrives in her village and demands to hire Kamzin—not her older sister, Lusha, as everyone had expected—for his next expedition. This is Kamzin’s chance to prove herself—even though River’s mission to retrieve a rare talisman for the emperor means cimbing Raksha, the tallest and deadliest mountain in the Aryas. Then, Lusha sets off on her own mission to Raksha with a rival explorer, and Kamzin must decide what’s most important to her: protecting her sister from the countless perils of the climb or beating her to the summit.

The challenges of climbing Raksha are unlike anything Kamzin expected—or prepared for—with avalanches, ice chasms, ghosts, and other dangers at every turn. And as dark secrets are revealed, Kamzin must unravel the truth about their mission and her companions—while surviving the deadliest climb she has ever faced.
Thoughts:
With so many exciting fantasy tales about to be released, Even the Darkest Stars sounds like it could be really different, so I have to say I'm intrigued. Plus, I highly enjoy tales of survival admits the elements, so Even the Darkest Stars has my attention with it's storyline already. Keen to see exactly what danger the main heroine faces!
What are YOU waiting on this week?