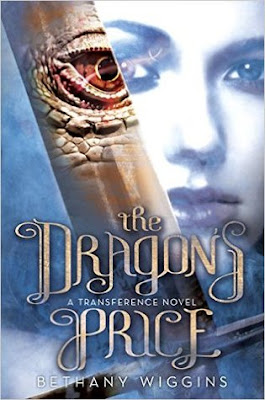 Fans of Julie Kagawa’s Talon and Renee Ahdieh’s The Wrath and the Dawn will devour this action-packed fantasy adventure about a girl who chooses to surrender herself to a deadly dragon rather than marry an enemy prince.

When two warring kingdoms unified against a deadly menace laying waste to both their lands, they had to make a choice: vow to marry their heirs to one another, or forfeit their lives to the dragon.

Centuries later, everyone expects the sheltered princess Sorrowlynn to choose the barbarian prince over the fire-breathing beast—everyone, that is, except Sorrow, who is determined to control her own destiny or die trying.

As she is lowered into the dragon’s chamber, she assumes her life is over until Golmarr, the young prince she just spurned, follows her with the hopes of being her hero and slaying the dragon. But the dragon has a different plan. . . .

If the dragon wins, it will be freed from the spell that has bound it to the cave for centuries. If Sorrow or Golmarr vanquish the dragon, the victor will gain its treasure and escape the cave beneath the mountain. But what exactly is the dragon hiding?

There are no safe havens for Sorrow or Golmarr—not even with each other—and the stakes couldn’t be higher as they risk everything to protect their kingdom.

The Dragon’s Price is the absolutely sensational latest release by Bethany Wiggins and is an incredibly addictive romantic adventure that will steal your heart from the opening chapter and not let it go! This story will leave you breathless!

Princess Sorrowlyn has just turned sixteen and in her in family that means making a choice; offering herself in marriage to the heir of a neighbouring kingdom or offering herself as sacrifice to a fire breathing dragon instead. Centuries before, Sorrowlyn’s ancestor and the Antharian King united to stop a deadly enemy that was attacking both their lands with the warring Kings vowing to marry their heirs in order to keep the dragon imprisoned. Generations later, this tradition that continued with the offer being made on the day of every Faodarian princess’s sixteenth birthday. Until sheltered princess Sorrowlyn shocks everyone by choosing death by the dragon over a forced marriage to a barbarian prince. Lowered down into the dragons cave, Sorrowlyn prepares for death until the young prince she spurned chooses to join her instead, beginning a journey neither Sorrowlyn nor prince Golmarr could have ever predicted…..

I absolutely adored The Dragon’s Price. Adored it! I honestly can’t say it enough. Bethany Wiggins has always thrilled me in the past and The Dragon’s Price is no exception with this fantastic tale capturing my total attention and imagination as soon as I begun reading it. The Dragon’s Price really does have it all--dragons, magic, battles, adventure, dashing, swoon worthy romance….there’s nothing this story doesn’t have!

Well written and in the vein of The Princess Bride, The Dragon’s Price is such a thrilling read. Featuring a heroine who starts out sheltered and innocent, a product of having spent her life hidden away, The Dragon’s Price features a wonderful character dynamic, especially the blossoming relationship between main character Sorrowlyn and her love interest Golmarr.

Sorrowlyn is a lovely young woman who, as a princess, is used to having people waiting on her. She’s been taught a woman’s place is to be seen not heard, and certain actions and desires are not proper, but there’s a fire (no pun intended) inside Sorrow that makes it evident that she is stronger than her station has made her feel, something Wiggins explores beautifully throughout the novel. Personally, I really loved Sorrowlyn. She was a sweetheart who was actually very strong and brave. She made choices and took chances in The Dragon’s Price that paid off. She grows a lot it only one instalment and brought a smile to my face repeatedly as she struggled to reconcile what she’d been taught with what she was coming to feel and believe. I loved the changes in her and can only imagine where Bethany Wiggins plans to take her still!

There were a lot of fantastic moments between Sorrowlyn and Golmarr. I mean, can I just say that Golmarr may be the perfect man? Fierce prince, but kind-hearted individual with a cheeky nature and protective and nurturing side where Sorrowlyn is concerned. I love the closeness that developed between Sorrowlyn and Golmarr over time. The innocent touches for comfort and the easy way they began to lean on and support the other was so sweet. Oh, and I loved the passionate moments and cheeky way Golmarr would interact with Sorrowlyn too—it was the perfect balance of cocky teasing with a purpose that didn’t come on sleazy in any way.

One of my favourite books of 2017 so far, A Dragon’s Price features an amazing storyline and a wonderful romance. Don’t let the deceptive cover fool you—it doesn’t do the story justice with an incredible gem inside it. I highly recommend The Dragon’s Price and am dying to get my hands on the next book in this brand new series from Bethany Wiggins that couldn’t have been any more perfect!

Source: Sent for review by publisher via Netgalley (Thank you guys!)
Publisher: Crown Books for Young Readers
Format: Kindle ebook via Netgalley
Release Date: 21st February 2017
Pre-Order: Bookworld | Booktopia | The Book Depository | Amazon
Final Thoughts: A wonderful fantasy adventure, with a killer ending, I can't wait for the next book to be released!