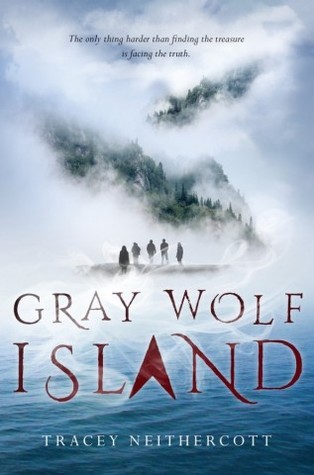 Right before Sadie died, she begged her sister, Ruby, to do the one thing she could never do herself: Find the treasure on Gray Wolf Island.

With just a mysterious treasure map as a guide, Ruby reluctantly allows some friends to join her on the hunt, each of whom is touched by magic: a boy allegedly born to a virgin, a girl who never sleeps, a boy who can foresee his own death, and a boy with deep ties to the island. Each of them is also keeping a secret—something they’ll have to reveal in order to reach the treasure.

As the secrets come to light, Ruby will have to decide: Can she make peace with her friends’ troubled pasts and continue to trust them? Can she forgive herself for doing the unspeakable? Deep in the wilderness of Gray Wolf Island, Ruby’s choices will determine if they make it out with the treasure—or merely with their lives.

From debut author Tracey Neithercott comes a darkly compelling tale of profound friendship, adventure, and finding the strength to tell the truth.


Thoughts:
Let me get this straight; a treasure map, a secret island, magic and a whole range of interesting characters? Ummm, hell yes! I love the sound of this story! It looks like to could be a really great adventurous read and I'm really hopeful for it.


What do you think of Gray Wolf Island?
And what are YOU waiting on this week?