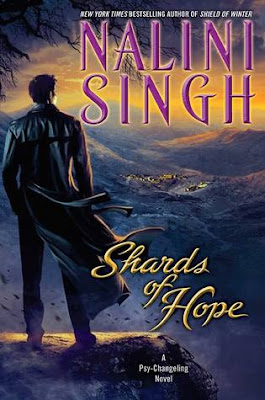 Awakening wounded in a darkened cell, their psychic abilities blocked, Aden and Zaira know they must escape. But when the lethal soldiers break free from their mysterious prison, they find themselves in a harsh, inhospitable landscape far from civilization. Their only hope for survival is to make it to the hidden home of a predatory changeling pack that doesn’t welcome outsiders.

And they must survive. A shadowy enemy has put a target on the back of the Arrow squad, an enemy that cannot be permitted to succeed in its deadly campaign. Aden will cross any line to keep his people safe for this new future, where even an assassin might have hope of a life beyond blood and death and pain. Zaira has no such hope. She knows she’s too damaged to return from the abyss. Her driving goal is to protect Aden, protect the only person who has ever come back for her no matter what.

This time, even Aden’s passionate determination may not be enough—because the emotionless chill of Silence existed for a reason. For the violent, and the insane, and the irreparably broken…like Zaira.

Shards of Hope is Nalini Singh’s 14th Psy-Changeling novel and is as always an enjoyable tale in what is a riveting, delicious and fantastically told series that never fails to disappoint.

A new day is dawning for the Psy, and Aden Kai, leader of the Arrows is determined to bring his people into a new life where they can laugh and feel and not be afraid. Hoping to change decade’s worth of conditioning, Aden wants his Arrows to experience happiness and love and hope, something Arrow Commander Zaira believes lost to her forever. Having suffered terrible childhood abuse at the hands of her parents, Zaira struggles with the rage and anger inside her, sure there’s no place for happiness and love in her future. All Zaira has ever wanted was to protect Aden, and when the two of them are kidnapped by an unknown enemy, Zaira vows to get Aden back to safety, even at the cost of her own life. But little does Zaira know that the person Aden cares for more than anyone in the world is her, and he’s determined to save the woman he’s always considered his own from her most dangerous enemy….herself.

While Shards of Hope isn’t my favourite book in this series by far, it was still a very enjoyable novel. There’s no doubt in my mind that Nalini Singh is a very talented storyteller, and after 14 novels, she still manages to keep me engaged and riveted with each new novel. Shards of Hope marks a new stage for this series as Singh continues to develop the series and even introduces us briefly to new changeling packs including the previously mentioned BlackSea, and newly introduced RainFire leopard pack. Personally I really loved Remi the RainFire alpha, so I’m putting him on the list of characters I hope Singh features in future books.

As characters Aden and Zaira were decent enough to read about. I liked them individually and as a couple, even as their chemistry didn’t blow me away as others in the series have. I enjoyed seeing them face their fears and find happiness with each other though; a beacon of hope in a struggling world.

One of the things I enjoyed about this novel so much was seeing the Arrows begin to become something more in Shards of Hope. Previously perceived as cold hearted assassins, I love how Aden is determined to turn them into a family where no one is mistreated and where children are able to feel safe and happy. Seeing Aden learn from Remi and implement those tactics and actions on his own people was super sweet; especially where children were concerned!

The ending of Shards of Hope marks a brand new direction for this series. The joining of the humans, changeling and the psy together in such a way opens a lot of doors and possibilities for further books and I know Nalini Singh plans a change of pace for the next novel. A series that just gets better and better, I look forward to reading the next novel so I can follow my beloved characters once again!