Today I have the Book Blitz for Curse of Stars by Donna Compositor on the blog thanks to Xpresso Book Tours and I have to say I really like the sound of this one. It looks like it could be a really great sci-fi read! 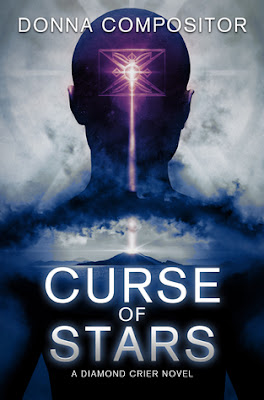 Sabi Perez is the last Diamond Crier, only she doesn’t know it. Not until a crazed ruler from another world comes to collect her priceless tears and won’t take no for an answer.

Living in New York, Sabi’s seen some nasty things, but the lengths to which her captor will go to keep his crown are things found only in the darkest nightmares. Afraid and alone, Sabi finds solace in her cellmate, Anya, and Cabal, a fellow Crier who also has powers, a rare combination that buys his favor from the ruler. Only it’s a favor he doesn’t want.

In a fit of rage, power erupts out of Sabi, the same power Cabal has, and a spark of hope ignites. Together they may have a chance at escape, something no other Crier has done. Except a ruler hellbent on draining them of every last diamond tear isn’t their only hurdle. If they escape they’ll be hunted to the ends of the earth, if they survive the trek to safety. If they stay the ruler will leech them dry. Sabi would rather die trying than lie down and die, even if that means running away into even more danger. 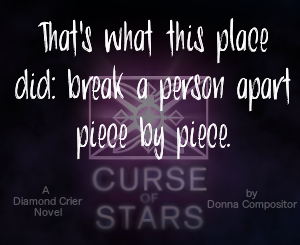 Fingers dug into her arm and she was yanked to her feet. She grunted as her skin pulled under the man’s grip and she stumbled when he dragged her along the corridor.

“Where are we?” she asked, her voice echoing on the dark stone around her. A well-worn carpet laid under her feet, track marks running the length of it. “What do you want with me?”

“Normally I wouldn’t have the patience for stupidity,” he said without looking at her. “But seeing as how you haven’t lived in Raydin for more than a decade I’ll abide you this.”

“You’re so kind,” she said as she tried to jerk her arm free.

No dice. Instead the man swung her around and slammed her back into the stone. Precious air rushed out of her lungs and panic made her gasp, wheeze, scramble to bring the air back in.

“There is no escape, Sabina. Rest assured, you’re here for life. However long that may be.”

“Why?” She sneered at the immaculate face in front of her. Not a hair out of place. Not a blemish anywhere on his skin. She wanted to rake her nails across his perfection. “Why did you kill my papa? Why did you chase us out of our home?”

He smiled then, a look that crawled up his face and failed to reach his eyes. “Your home, little Crier, is here. Far south from this castle. That’s where your parents ran from the first time. Alas, they couldn’t run forever.”

Sweat broke out on her forehead. She didn’t understand, but Papa said the same thing. They weren’t from a world that had New York. They were from somewhere else. Nausea swirled in her stomach.

“I have all the powers of the stars,” he said as he brushed a piece of hair from her face. She jerked away from his touch. “Well, not all. Most. Most my family took from the Giver when they deposed him centuries ago. He was such a pacifist. It was almost too easy. All that power he just gave away to filth in this kingdom. Such a waste. We stopped that, though. We just couldn’t get diamond tears.”

The man frowned and leaned away from her. He yanked her off the wall and continued walking down the corridor. “No, I imagine you wouldn’t. We couldn’t throw a successful coup without money. Lots of money. We had it, of course, but not enough. Not enough to sustain us. With the Giver’s powers, especially diamond tears, our problem would be solved. Instead we were still at his mercy, the decrepit old man.”

No, she wanted to say. That’s not what she meant. She understood why power-hungry people wanted power and money. What she didn’t understand was this Giver, his powers. What this all had to do with her. Her back throbbed. Bruises formed knots along her spine and she already felt their ache.

“It worked out for us and for him. While he’s stored away, nice and safe, he keeps doling out diamond tears and we merely collect those with the power. If he stops, the slaughter of his people would be on him. You understand? Sabina, I asked you a question.”

Sabi choked on the answer and finally said, “Yes.” It was a lie, but this man didn’t seem like someone who was used to hearing no. 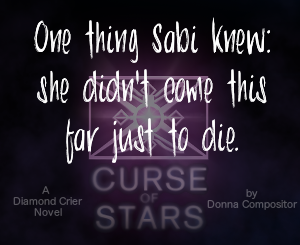 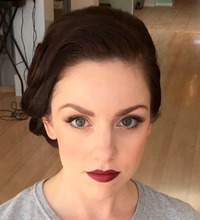 Donna has been writing since she was in the single digits when she first realized she needed to do something about all the thoughts in her head. After a stint with bad poetry she finally found her way to novels, mainly of the young adult fantasy variety. When she’s not cranking out more stories she works a regular 9 to 5, reads anywhere from 2 to 3 books a week, drinks copious amounts of tea, eats way too much, and makes her own beauty products because her skin turns into a sentient hive if she uses anything else. This is mostly because she lives in the desert where the air siphons water clean out of her. She lives with a man named Steve and several quadrupeds: three cats named Renfield, Sam, and Dean; and a MinPin named Malfoy.