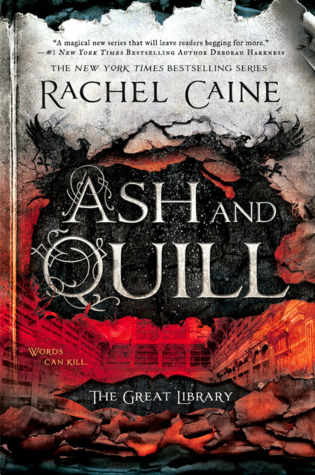 Ash and Quill by Rachel Caine
Releases on: July 11th 2017
Add on Goodreads!

The unforgettable characters from Ink and Bone and Paper and Fire unite to save the Great Library of Alexandria from itself in this electrifying adventure in the New York Times bestselling series.

Hoarding all the knowledge of the world, the Great Library jealousy guards its secrets. But now a group of rebels poses a dangerous threat to its tyranny....

Jess Brightwell and his band of exiles have fled London, only to find themselves imprisoned in Philadelphia, a city led by those who would rather burn books than submit. But Jess and his friends have a bargaining chip: the knowledge to build a machine that will break the Library’s rule.

Their time is running out. To survive, they’ll have to choose to live or die as one, to take the fight to their enemies—and to save the very soul of the Great Library....

Thoughts:
I looooove this series and am SO VERY excited to read the next book. The world Rachel Caine has created is so vivid and unique and addictive to get lost in. After the last book ended I automatically began counting the days down until I could get the next one and I'm even more looking forward to it after seeing that amazing cover and reading that description. Bring on July!


What do you think of Ash and Quill? Have you read this series?
And what are you waiting on this week?