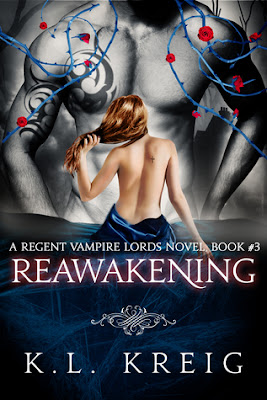 “I’m not a piece of property that you can just claim, Romaric.”

Having been held hostage for a month by vicious vampires, Sarah is now recovering in the most unlikely of places…the shelter that her sister, Kate and her vampire mate, Devon, opened to help such victims as herself. After months under the watchful eye of her sister, she’s finally put a plan into motion to secure her future when a very imposing, very stoic and utterly drop dead gorgeous vampire takes her world by storm and turns it completely upside down.

“Ah, but that’s where you’re wrong, my beauty. You are mine and I’ve come to do exactly that.”

Romaric Dietrich, West Regent Vampire Lord is one of the oldest vampires alive. He’s cold, calculating and nearly unmatched in power. Vampires recognize their Moiras instantaneously and upon first laying eyes on Sarah Hill, he senses she’s his. His Moira. His Destined mate. The one woman meant to be his and his alone. But how is that possible when he’d loved and lost his first? In his quest to uncover the truth, not only does he discover that Sarah is indeed the other half of his soul, but he’s put himself, and his mate, in the crosshairs of yet another very powerful enemy.

Only bonded together do they have the power to win the battles ahead.
With one look into his icy-blues, Sarah knows that Romaric is not the aloof, uncaring enigma he pretends to be. Underneath his cool, rough exterior lays a passionate, romantic and fiercely loving heart of gold. As they fight the battles to come, Sarah holds the key to not only unlocking his centuries hardened soul, but to the one thing that will save them both from this new nemesis.

But will she make her decision in time? And will they finally get the happiness they both deserve?

Reawakening is the third release in K.L. Kreig’s Regent Vampire Lords series and is another supple and sizzling romance tale that this time follows Romaric and Sarah, two individuals about to discover their lives have been intertwined far longer than they could ever have expected.

Romaric Dietrich is one of the oldest vampires in existence. He’s seen countless centuries and is as stoic, serious and as reserved as they come. That is until he walks into the home of one of his dearest friends and locks eyes with Sarah, discovering in her his Moira; something that severely throws the conservative vampire who has already loved and lost his Moira centuries before.

Sarah Hill has been to hell and back over the last couple of months. Kidnapped, held hostage and then rescued from her monstrous father, Sarah’s life has changed drastically in recent times. She now lives in a well-protected compound with her sister and her mate, but the moment Sarah sees Rom she knows she’ll never be the same. As the Lords prepare to take their final stance against Xavier, Romaric must come to terms with having a second chance at love and Sarah must accept her newfound mate if they want to survive the coming evil…..

While I still think Belonging is my favourite tale in the series, I did enjoy Reawakening very much. K.L. Kreig explores another touching romance and follows another couple whom I honestly enjoyed seeing discover happiness with each other. I’m still invested in the lives of the characters and would truly enjoy seeing stories about a lot of the characters, not just the main Lords. I think if she wanted, K.L. Kreig could write a very long, very detailed series with many of the minor characters finding their Moira’s along the way.

Reawakening is told predominately through the eyes of Romaric, Lord of the West and Sarah Hill, a strong young woman who had her eyes opened to the dangerous world of vampires when she became a victim of her, at the time, unknown father, who was kidnapping women to breed himself a vampire army. Upon discovering that she is part vampire and her subsequent rescue, Sarah has embraced her new life, siblings and responsibilities. I enjoyed seeing her find love and a mate in Rom. They were sweet and I thought Kreig wrote a nice romance.

Romaric isn’t my favourite of the Lords and I disapproved of some of his actions in this novel, but Kreig redeemed Rom by the growth he undertook and the love he felt for Sarah. I always love seeing characters who have loved and lost love again and it’s the case with Rom in Reawakening. Sarah literally reawakens something in him Rom thought lost long ago and I liked that.

After this novel, I’m really eager for a story featuring Mike and Giselle more than ever. K.L. Kreig includes so many delicious chapters from Mike’s POV that I’m already swept up in their love affair. After seeing so much of Mike, I’m well and truly ready to get to know Giselle more. Then, if possible I would love if Kreig wrote a story featuring Geoffrey and Beth—they have a story that I think needs to be told!

Fast paced, well detailed and highly addictive, Reawakening is another brilliant tale in the Regent Vampire Lords series that left me satisfied, yet ready to read about some of the other characters!

Source: Sent for review by the author (Thank you K.L!)
Format: Kindle ebook
Buy it:  The Book Depository | Amazon | Barnes & Noble
My Recommendation: A great vampire romance series!
Cover: This cover is stunning--I think it's beautiful.
Will I read sequel/continue with series: Yes. I really hope K.L. Kreig writes more as I want to read more about these characters.