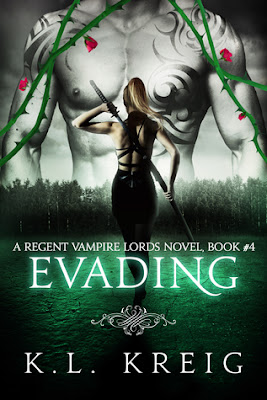 “Let me obliterate each and every last beast that’s holding that beautiful mind captive, Giselle.”

It’s no secret Detective Mike Thatcher wasn’t a fan of the blood drinkers. They stole his life, his woman, his future when they kidnapped his college sweetheart. So of course Fate paired him with the one thing he’d spent the past eleven years hating…a vampire. But Giselle isn't just any vampire. She’s seduction, sin, strength and fragility all wrapped into one ice-cold package.

“That could take a lot of time. I have a lot of demons.”

Giselle has reasons for her sandpaper exterior, but they’re hers and hers alone. Then along came the one male she never wanted. Her Fated. Mike changed her in ways she didn’t like. He made her soft. He made her care. The gorgeous asshole made her feel, goddammit. And he’s just made it clear the running is over. Letting love in would prove to be the biggest challenge she’d ever faced.

But as Mike lets the past go, can Giselle do the same? Can she bare her soul? Show her shame? Just as Giselle stops fighting the inevitable, her entire world doesn’t only shift on its axis…it falls the fuck off.

NOTE: THIS IS NOT A STANDALONE! In order to fully enjoy Mike and Giselle's full story, you must start with the first book in the Regent Vampire Lords series, Surrendering, as their back story unfolds throughout the previous three books.

Evading is the highly anticipated fourth instalment in K.L Kreig’s deeply satisfying Regent Vampire Lords series and is the long awaited tale of vampire Giselle and human detective Mike, two scarred and fierce souls whose attraction to each other has been simmering for months and is finally set to implode with stunning results…..

Man, does K.L. Kreig know how to write! Seriously. Evading is the best book so far in a series that has been brilliant from the very beginning and never fails to disappoint. Evading is a fast paced, emotionally rich tale that finally allows us to learn of the scars that have tormented Giselle and that have left her afraid to build a future.

I know it may seem cheesy, but the moment Giselle and Mike met, I knew they were meant to be. Kreig has built them up deliciously throughout the previous books; tempting, teasing and setting the base for their relationship. She set the stage for Evading and it was everything I hoped it would be and more. Well written, Evading switched back and forth between Giselle and Mike perfectly and managed to give as a well-rounded view of their story.

Evading focuses heavily around Giselle and the past that has haunted her. It becomes clear quite quickly that the icy façade Giselle projects is exactly that, a façade. Beneath the cold and uncaring picture Giselle paints, is a scared and brittle individual who is deeply frightened of letting herself feel for Mike and who truly loathes herself; feeling dirty and unworthy. As I briefly mentioned, K.L. Kreig packs a lot of emotion into this book.

I loved Giselle before, but I love her even more now—the strength it must have taken for her to continue on after the atrocities that were done to her is exceptional. It makes her stronger than she realises and Kreig never shies away from how bad Giselle was treated and how she was violated. Mike was a truly perfect match for her and the depth of the love he feels for Giselle shines throughout this novel. He was able to bring her to life in every sense and I loved seeing them face their demons together.

As Giselle’s Fated, Mike had a lot to learn and accept and he does so beautifully—nothing was going to keep him from Giselle. K.L. Kreig does a fantastic job of finally giving them a happily ever after, even if it is fraught with difficulties and Giselle’s fear. Evading is sensual and sexy and full of hot sex scenes. Most of the previous characters make an appearance and Kreig gets her cute on with a development at the end I won’t spoil and give away, but does certainly mean lots of happiness for Giselle and Mike.

Though this novel ending perfectly, I must say I’m still not quite ready to let the series go after Evading. Ren features a lot in this instalment too and I’m already considering whether we’ll get to hear both his and Geoffrey’s stories!

Perfect for fans of Black Danger Brotherhood and Midnight Breed, the Regent Vampire Lords series is highly satisfying and I highly recommend picking it up if you’re looking for a well-paced, well plotted and enjoyable vampire tale!

Source: Sent for review thanks to Social Butterfly PR and the author (Thank you ladies)
Format: Kindle ebook
Buy it: Amazon US | Amazon UK
My Recommendation: Perfect for fans of BDB and Midnight Breed series!
Cover: Stunning cover. All the covers in this series are beautiful and go perfect together!
Will I read sequel/continue with series: Yes! Can't wait to read Ren and Geoffrey's tales!