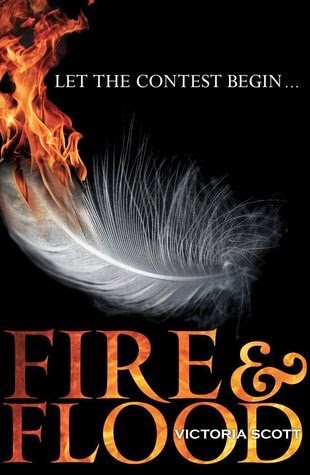 A modern day thrill ride, where a teen girl and her animal companion must participate in a breathtaking race to save her brother's life—and her own.

Tella's brother is dying. He's got cancer, and Tella is helpless to save him. Or so she thought. When an invitation arrives for Tella to compete in the Brimstone Bleed, a deadly competition that will lead her through treacherous jungle and scorching desert, she doesn't think twice. Because the prize is a cure to any illness. But Tella will be facing more than just the elements.

Fire & Flood is an absolutely sensational story by Victoria Scott that will entrance you from the get go and sweep you away with it's face-paced storyline, riveting stakes and dashing originality. Danger, excitement and even romance blend in this gripping story that will leave you begging for more!

Can I just start by saying how incredibly much I loved this book--I mean, I adored it! And would dive straight into the sequel if it was already released. It simply was that good! Honestly, I'm having difficulty wrapping my head around this novel, because there's so much I wanna say, but I want to make sure it makes sense.

Heading into Fire & Flood, I wasn't really sure what to expect. I'd never read a book by Victoria Scott, though I know she's written another series previously. It really was a surprise to receive a copy of this for review as I'd never heard of it before and the back cover doesn't give too much away.  And in saying that, imagine my surprise when I began the story and was instantly caught up in it's riveting storyline.

Fire & Flood follows sixteen year old Tella Holloway whose older brother Cody is suffering from a terminal illness and is slowly dying. Tella is faced with the heartbreaking reality of watching her brother die and knowing there is nothing anyone can do, when a mysterious box is left on her bed, and the device inside promises a cure to his illness if she wins a contest known as the Brimstone Bleed. Despite its mysterious origins and its vague instructions, Tella jumps at the chance to possibly save her sibling and soon finds herself following the directions of the devices makers to enter the race.

Fire & Flood is a really beguiling book to read. In some ways Fire & Flood is reminiscent of The Hunger Games and yet it has it's own unique storyline that sets it apart. Beginning the story, I almost had my mind made up that this would be a dystopian read of sorts, so imagine my surprise when I quickly discover Fire & Flood is set in the modern world. Victoria Scott does a fantastic job drawing her readers in while managing to maintain the highest level of mystery throughout the novel.

Something I found really powerful in Fire & Flood is that the contenders within the Brimstone Bleed really know next to nothing about the actual race they're participating in, and the thing that drives them is the possibility of a cure to the ailments effecting those they love. There's really no proof that this cure exists or that the race is actually legit and yet they're driven onwards just by the possibility that they can potentially cure someone they love.

Each with the help of their own animal companion known as a Pandora, the Brimstone Bleed contestants must make their way through different legs of the race, two of which we witnesses in Fire & Flood in order to win. Different elements at different destinations ensure the Brimstone Bleed is a really horrific and dangerous race. It's very grueling; both emotionally and physically and puts all the contenders through their paces. Personally, I never knew what would happen next and loved that Victoria Scott managed to keep me on my toes!

Scott introduces us to a really fantastic cast of characters in Fire & Flood, starting with, but not ending with our main character Tella. In the beginning of the story, Tella starts out as almost self centered and vain, and yet she's driven by the base love she has for her brother. Participating in the Brimstone Bleed forces Tella to grow up fast and to re-evaluate what's important.

I think the growth Tella undertakes in this first novel is nothing short of amazing. Scott has penned a really interesting character in Tella; one that I truly enjoyed following! Tella has her faults, as everyone does but at her base is a really good individual. The strength she displays throughout the novel is admirable and the kindness and love she exhibits to her those around her, both human and Pandora was lovely to witness. I loved the relationship Tella builds with the other characters including her adorable fox Madox. Tella sees Madox differently than the other contenders see their Pandoras and I found them so adorable to behold at times.

Tella meets a multitude of characters in Fire & Flood and Victoria Scott does an amazing job in writing her supporting characters. They compliment the fantastic storyline and I fell in love with each and everyone of them. The group of contenders Tella travels with including Guy, Harper, Caroline, Dink, Levi, Ransom, Jaxon, Olivia were all great editions to the story. The complexity of the story is driven home by the fact that there can only be one winner, but at the same time each individual is a human being with feelings and emotions, something we come to learn as the story progresses.

Victoria Scott pleased me to no each with all these individuals and appealed to the romantic in me by including a love interest for Tella, whose relationship with her continued to develop and rock my socks off! No spoilers here from me, but I just adored these two and hope they continue to shine throughout the rest of the series!

The inclusion of the Pandora's within the story was something I found absolutely sensational to be honest! Each contender has their own Pandora meant to assist them during the race and I was very impressed that Scott managed to make them each different and unique from the other. They themselves were really another bunch of characters with their own drives and differences and I loved seeing them within then story--especially Madox! He was just the most cutest thing on four legs in this novel!

There a lot of unexpected humor and wit in this novel with the inner monologue Tella keeps making for some fantastic reading. And yet Victoria Scott blends so much danger and violence in the story with more than one of the characters not making it through the first two legs of the race.

High on excitement and mystery, Fire & Flood is a captivating read that will easily have you ready for more. Racing towards a climactic ending with unexpected revelations, Victoria Scott has quickly won a fan in me, and has ensured I'll be reading the next installment as soon as I can get my greedy little hands on it!

Source: Sent for review by Scholastic Australia (Thank you Sarah!)
Format: Paperback
Buy it: Bookworld | The Nile | The Book Depository | Amazon
My Recommendation: This book was sensation and completely worth a read!
Cover: It's simple, but I like it.
Will I read sequel/continue with series: YES!