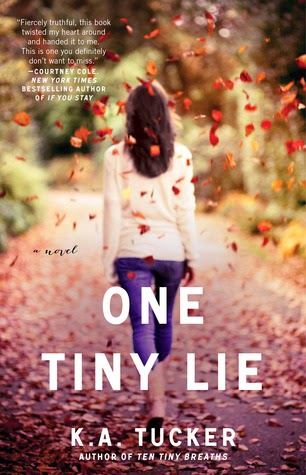 Livie has always been the stable one of the two Cleary sisters, handling her parents' tragic death and Kacey's self-destructive phase with strength and maturity. But underneath that exterior is a little girl hanging onto the last words her father ever spoke to her. “Make me proud,” he had said. She promised she would...and she’s done her best over the past seven years with every choice, with every word, with every action.

Livie walks into Princeton with a solid plan, and she’s dead set on delivering on it: Rock her classes, set herself up for medical school, and meet a good, respectable guy that she’s going to someday marry. What isn’t part of her plan are Jell-O shots, a lovable, party animal roommate she can’t say ‘no’ to, and Ashton, the gorgeous captain of the men’s rowing team. Definitely him. He’s an arrogant ass who makes Livie’s usually non-existent temper flare and everything she doesn’t want in a guy. Worse, he’s best friends and roommates with Connor, who happens to fits Livie’s criteria perfectly. So why does she keep thinking about Ashton?

As Livie finds herself facing mediocre grades, career aspirations she no longer thinks she can handle, and feelings for Ashton that she shouldn’t have, she’s forced to let go of her last promise to her father and, with it, the only identity that she knows.

One Tiny Lie is the emotional and riveting sequel to K.A Tucker’s sensational Ten Tiny Breaths and is a sleek and sensual romance that is almost as good as its predecessor! This book with hook you from page one!

I have to say….I am thoroughly enjoying this series. I may have been late to start, but boy am I breezing through these fantastic reads! Ten Tiny Breaths set the bar high, but with its sequel One Tiny Lie, K.A. Tucker is proving to me she is definitely not a one trick pony—this woman can write! And write she does!

One Tiny Lie was a superbly written story of romance and a young woman’s journey to find herself. Featuring perfectly flowing writing, One Tiny Lie follows Livie Cleary, the sweet, kind and shy sister of Ten Tiny Breaths protagonist Kacey we met in the first book, only now at eighteen Livie is attending Princeton and getting her first taste of collage life. There’s an aura of emotion to Tuckers writing and she creates a great story for her characters. There’s romance, friendship and love all woven together, and Tucker compliments the characters and story well by not dwelling too much on the physical aspect of Livie and her love interests relationship.

Personally, I really liked Livie. I was so excited to follow her story having loved her in Ten Tiny Breaths. With her sweet, shy and naïve nature, in a way she reminds me of myself and I found her easy to relate to. Livie has always been the "good" girl; straight edged and focused, and she’s been happy that way, but there are so many aspects of life Livie has been missing. She’s smart and level headed and very focused on what she wants to be. It’s not until she finds herself at university that her eyes are opened and she begins to experience things like boys, drinking and partying. Livie has been very sheltered and never experienced what most girls have by her age and seeing her finally experience them is a great experience.

Livie finds trouble in the form of Ashton Healy; captain of the boys rowing team, player and sarcastic ass, and though he is the last one she expects to be attracted to, try as she might Livie can’t get Ashton off her mind. I do think Livie and Ashton were really great together. They had great chemistry and I loved seeing Ashton make Livie come alive. I always enjoy seeing characters connect, especially when they come from difficult pasts and help to heal the other and this was definitely the case with Livie and Ashton.

My only issue with this book, and the thing that kept me from rating it a perfect score, was the cheating. The cheating aspect didn’t sit well with me. Perhaps I’m being naïve to think that when you’re dating someone, even if you are supposedly taking things slow, you don’t cheat. There is no sneaking around with another person and getting lost to the passion and all that. Even if you’re insanely attracted to someone and actually feel something real and deep for them, end your current relationship first and then explore what you can’t deny.

The fact that Livie found herself in a relationship with Connor and yet still found herself acting on her feelings for his best friend at the same time didn’t sit a hundred percent well for me. Admittedly, I was able to get over this and did find it disappearing from my mind when I saw how deep the connection Livie had with Ashton, but I still keep coming back to the fact that had Livie should ended things first with Connor first before moving forward with Ashton.

Boldly written and choc-full of brilliant characters that will steal your heart with their temperaments and stories, One Tiny Lie has me ready to dive into book number three!

Source: Sent for review by Simon & Schuster (Thanks guys!)
Format: Paperback
Buy it: Bookworld | The Nile | The Book Depository | Amazon
My Recommendation: This is a New Adult MUST READ series!
Cover: Lovely
Will I read sequel/continue with series: Yes!