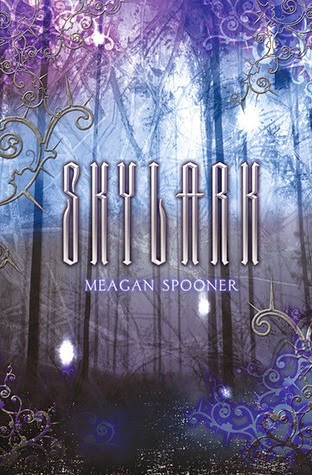 Her world ends at the edge of the vast domed barrier of energy enclosing all that’s left of humanity. For two hundred years the city has sustained this barrier by harvesting its children's innate magical energy when they reach adolescence. When it’s Lark’s turn to be harvested, she finds herself trapped in a nightmarish web of experiments and learns she is something out of legend itself: a Renewable, able to regenerate her own power after it’s been stripped.

Forced to flee the only home she knows to avoid life as a human battery, Lark must fight her way through the terrible wilderness beyond the edge of the world. With the city’s clockwork creations close on her heels and a strange wild boy stalking her in the countryside, she must move quickly if she is to have any hope of survival. She’s heard the stories that somewhere to the west are others like her, hidden in secret—but can she stay alive long enough to find them?

Skylark by Meagan Spooner is a surprising and at times difficult read that gets off to a slow start but then steadily progresses into a fast-paced and thrilling tale that is a mix of fantasy, sci-fi, dystopian and steampunk and will leave you well and truly ready for more!

In all honesty I don’t think I’ve ever had a reading experience like I’ve just experienced with Skylark. I mean, it took almost 200 pages for the book to capture my attention and to be honest I almost gave up and didn’t finish it. Granted some books do take a while to pick up, but to get almost halfway through a novel and still struggle to find something to really capture your attention is a long time.

I almost felt like Skylark was two different books. While the beginning really lagged, the second half was simply incredible and if the whole book was this good I may have given it 5 stars. Following Lark Ainsley, a sixteen year old girl who has spent her whole life never seeing the sky and never journeying past the Wall that surrounds her city and protects it from the dangerous elements that exist on the other side, Skylark is a real mixture of genres.

There’s a bit of fantasy, sci-fi, dystopian and steampunk all woven together; with horrendous monsters mingling with magic, machines and mystery. Spooner’s writing is deeply descriptive and I quite enjoyed the world she has created. It was very unique and unlike anything I’d seen before, with so much still unknown and a mystery to both our heroine and us as the reader.

Skylark depicts a dystopian-styled society where wars waged a hundred years prior have left the outside world twisted and uninhabitable. With the Wall that encompasses the city the only thing protecting it from the outside elements and the monsters that call it home, magic is “harvested” from the younger members of the city and is used to power not only the Wall but the technology and machines that keep the city running.

Again, the novel started out quite slow, but once it picked up, I very much enjoyed the journey I found myself on with main character Lark, a young woman who begins to exhibit powerful magic, after a lifetime of feeling like a dud in the beginning of Skylark and who finds herself an unwitting pawn in plans held by her city’s leaders.

Lark’s journey is a long and difficult one that sees Lark travel across vast plains, through iron forests and magical pockets; hiding from tremendously dangerous monsters and creatures as she goes. Hers really is a tale of survival, as she tries to discover what makes her different from all the other individuals of her world.

I foresee a lot of growth in Lark throughout this series. She has already come such a long way in just only one installment; quickly becoming the kind of heroine who is a joy to follow and who you truly cheer for. There’s still a lot of mystery surrounding what Lark is that makes her different from everyone else, and I’m really excited to see what Spooner does with Lark. From the beginning of Skylark to it’s end, Lark transitions a lot and I was happy to see her find something to fight for. She’s slowly learning to survive on her own and even though she was scared and unsure, she still did what she had to do.

Lark meets a number of different individuals during the story including those of the Iron Wood, but the two that I adored the most were Nix, the copper “pixie” who becomes Larks shadow and constant companion and Oren, the wild boy whose true nature will be a shock to readers.

I’m very much looking forward to seeing more of these two characters and their relationships with Lark—Nix as a friend for Lark and Oren as a potential love interest. Spooner has me intrigued with what she’ll do with these two characters; considering some unexpected revelations that left me surprised during Skylark but that promises some interesting future reads.

Rich in description and setting, Skylark starts out slow but that rises into a promising start to a magical series. Ending just when its getting good, Skylark guarantee’s I’ll be racing out to get the next book as soon as humanly possible.

Source: Sent for review by Random House Australia (Thank you Dorothy!)
Format: Paperback
Buy it: Bookworld | The Nile | The Book Depository | Amazon
My Recommendation: If you enjoy the Under The Never Sky series then this will definitely appeal to you!
Cover: Does do anything for me unfortunately.
Will I read sequel/continue with series: Yes. Despite Skylark's slow start, I'm very much looking forward to the next book!