Book Blast: Once In A Blue Moon by Delilah Devlin- Excerpt & Giveaway 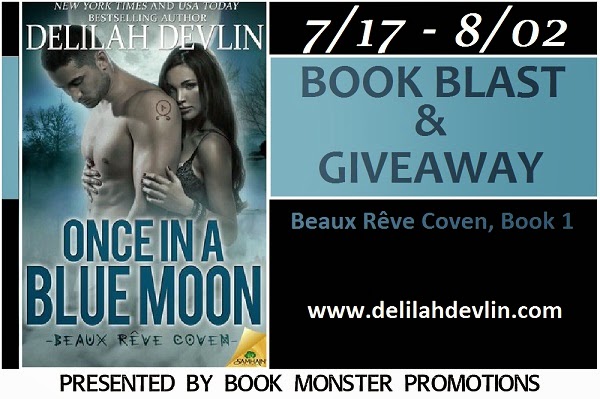 Welcome to the Book Blast for Once In A Blue Moon by Delilah Devlin thanks to Book Monster Promotions! I have a very sexy excerpt to share and a tour wide giveaway to share with you :) 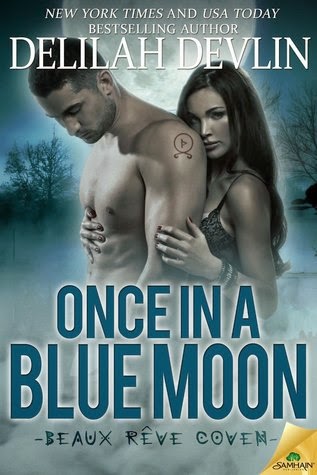 When testing an enemy for weaknesses, prepare for things to get hard.

Bryn Cavanaugh and her coven like that the community they live in is isolated thanks to a storm that destroyed the bridge between them and the outside world. Now the state wants the bridge rebuilt. When the construction crew checks into the inn, Bryn begins to suspect something about the crew’s boss isn’t quite…human.

Bridges are Ethan Thorne’s thing—after all, he’s a troll—so building a simple span over a remote canal in backwater Louisiana shouldn’t be this much of a problem. When he follows the pretty little innkeeper to a midnight rendezvous, he discovers why his crew keeps running in to trouble. Bryn and her coven are casting spells in the moonlight.

As a troll, Ethan feels the sting of his low place in demon hierarchy. But finding an unprotected coven of witches in the middle of the bayou could lead to all sorts of adventure. And it’s better to keep your enemies close…

Warning: Contains a handsome troll (Hey, it can happen!) who’s skilled at building sexual tension with his hands—and several other body parts, as well—and a witch who’s determined to protect her home, but forgets to shield her heart.

He nuzzled his nose through her hair, skimmed his lips over her neck, and she couldn’t resist tilting her head to allow him a little more access to her bare skin.

Not a request. Not that she minded at all. She was eager to be alone with him. She let him take her hand and pull her toward the kitchen door. They slipped out onto the porch, and he let her lead him with their fingers intertwined past the raised-bed herb garden, past tall beanstalks and sweet corn. She led him to the trellised gate, overhung with hyacinth. “It’s not much farther,” she said, glancing back.

His expression was closed, his dark eyes shadowed. But she wasn’t afraid. He tightened his hand around her fingers. He was growing tense. Just like she was—from anticipation.

Beautiful. Frightening as well, because there in the darkness they cloaked awaited the possibility of intimacies shared—with this man who had managed to consume her thoughts from the first moment his glance had landed on her. Just yesterday. How could that be?

Already, when they weren’t together, she was obsessed with thoughts of him. When he was near, her body awoke. Her breasts ached for his touch. Her sex throbbed with building heat. She was constantly wet. Constantly ready. If he wanted her this night, she wasn’t going to refuse. Her body was too painfully aroused to ignore.

They entered the structure and he tugged her to a halt. She stood facing away, trying to catch her breath. But her breathing was so shallow she was nearly panting.

He let go of her hand and settled both of his at her waist. His grip was light but insistent, and he pressed against her back. His chest was a brick wall. And below, she felt the nudge of a long, hard column against her buttocks.

Silently, he was warning her. This was what he wanted. She could refuse, ease away from the pressure, and he would accede, perhaps giving her kisses and caresses through her clothing. Nothing more than she was willing to accept at this moment.

But she was greedy. She wanted everything he had to give, and she wanted it now. Lifting her hand, she shifted her hair from her neck. “The zipper’s right there.” 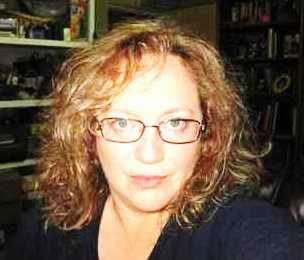 Until recently, award-winning romance author Delilah Devlin lived in South Texas at the intersection of two dry creeks, surrounded by sexy cowboys in Wranglers. These days, she’s missing the wide-open skies and starry nights but loving her dark forest in Central Arkansas, with its eccentric characters and isolation—the better to feed her hungry muse!

For Delilah, the greatest sin is driving between the lines, because it’s comfortable and safe. Her personal journey has taken her through one war and many countries, cultures, jobs, and relationships to bring her to the place where she is now—writing sexy adventures that hold more than a kernel of autobiography and often share a common thread of self-discovery and transformation.