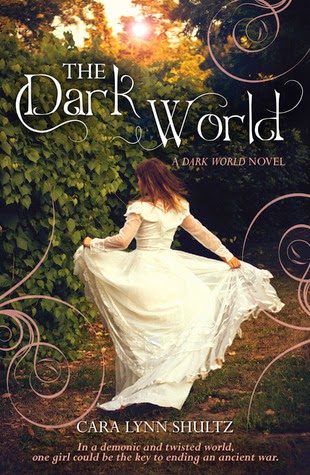 Paige Kelly is used to weird--in fact, she probably corners the market on weird, considering that her best friend, Dottie, has been dead since the 1950s. But when a fire demon attacks Paige in detention, she has to admit that things have gotten out of her league. Luckily, the cute new boy in school, Logan Bradley, is a practiced demon slayer-and he isn't fazed by Paige's propensity to chat with the dead. Suddenly, Paige is smack in the middle of a centuries-old battle between warlocks and demons, learning to fight with a magic sword so that she can defend herself. And if she makes one wrong move, she'll be pulled into the Dark World, an alternate version of our world that's overrun by demons-and she might never make it home.

The Dark World is the first novel in the demonic new series by Cara Lynn Shultz that sees a strapping teenage girl discover a dark but seductive alternate world that lies parallel to our own in this smart and sassy start to a promising new series!

Heading into this novel, The Dark World held such promise for me. And while I certainly enjoyed this novel and found it a very enjoyable read, I don’t think it exactly met my expectations either. It got close, although there was just that something extra that was missing in my eyes during certain parts of the book.

Set in New York City and following Paige Kelly, a smart mouthed and sassy teenager who happens to see the dead and has a tenancy to talk to them, thus earning herself a bit of a reputation for having a few screws loose, The Dark World was richly written and depicted. Personally, I think it was a nice introduction to a new series and find myself eager for more after this installment.

The Dark World sees Paige discover a dark and alluring alternate world that exists on another dimension to ours. This world tends to mirror ours, but is also home to a vast array of horrendous creatures and powerful demons who want nothing more than to take control over our world and will stop at nothing to find a portal into our world, even if it means using Paige.

Blending the evils of men with otherworldly politics, Shultz introduces us to many different characters including ghosts, warlocks and demons that mingle with humans in The Dark World. Leading lady Paige is sharp and daring but isolated due to her social pariah status and finds an unexpected ally in new boy Logan who is as mysterious as he is shy and alluring. Shultz includes some bubbly and personable characters in the form of Dottie, Paige’s best friend who died in the 1950’s and Ajax, a arrogant and sarcastic demon who I’m dying to know more about!

The plotline of The Dark World seemed a bit odd to me, although not necessarily in a bad way. Don’t get me wrong, there was plenty of action and excitement and the story has a wonderful overall pace, but I didn’t feel like a lot was happening in terms of story movement at times. There was plenty going on, and the story certainly kept me entertained as our heroine began to learn of this world behind hers, but it wasn’t until almost the end of the book that Shultz began to heavily evolve the storyline.

The Dark World explores an interesting concept and I was really pleased with some of the twists Shultz included that I wasn’t expectibng, but find extremely interesting. I have a lot of hope for the next book and feel this was a satisfying start to a promising new series by Cara Lynn Shultz. The Dark World races to a climactic ending that has me ready to read the next book pronto!

Source: Sent for by HarelquinTEEN Australia (Thank you Polina!)
Format: Paperback
Buy it: Bookworld | The Nile | The Book Depository | Amazon
My Recommendation: Fans of the supernatural will enjoy this.
Cover: It's pretty; reminds me of the covers in her other series too.
Will I read sequel/continue with series: Yes, I look forward to more.