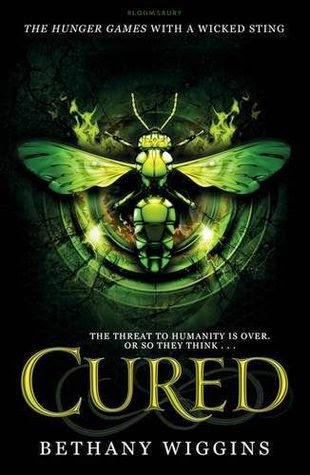 Now that Fiona Tarsis and her twin brother, Jonah, are no longer beasts, they set out to find their mother, with the help of Bowen and a former neighbor, Jacqui. Heading for a safe settlement rumored to be in Wyoming, they plan to spread the cure along the way--until they are attacked by raiders. Luckily, they find a new ally in Kevin, who saves them and leads them to safety in his underground shelter.

But the more they get to know Kevin, the more they suspect he has ties to the raiders. He also seems to know too many details about Jacqui and her family—details that could endanger them all. For the raiders will do anything they can to destroy the cure that would bring an end to their way of life. Bethany Wiggins’s reimagining of our world after an environmental catastrophe won’t fail to stun readers.

Cured is the stunning sequel to Bethany Wiggins sensational dystopian Stung and is as exciting, riveting and completely addictive as the first book. Stellar romance, shocks, secrets and danger all weave together to create a story that will have you highly entertained from beginning to end!

I have to start by saying, Stung became an unexpected favorite of mine last year. Though I knew nothing heading into it, it quickly became one of the best books I read last year, and I now consider it one of my favorite dystopian reads, right up there with the likes of Divergent and The Hunger Games! So in saying that, it goes without saying I was ecstatic for it's sequel....but I was also very nervous. Fo and Bowen won me over in the first book, but going into Cured I knew we had a new main character and a new storyline and I worried it wouldn't live up to the first....luckily this was in no way the case!

Cured picks up introducing, or re-introducing us I should say, to Jacqui "Jack" Bloom, a seventeen year old girl whom we met previously, albeit briefly, in Stung. Continuing on from the previous book, Cured depicts a society that has been devastated by the loss of bees and the result this has had on the ecosystem and as such society in general. In a world where Beasts roam and survival isn't guaranteed, it is especially unsafe for women. This shortage of women means Jacqui must live in secret as a boy; cutting her hair and now living as Jack in order to stay out of the sights and minds of raiders, who would otherwise do her harm.

I truly, truly liked Jacqui. Or Jack, I should say. Having come to love Fo so much in the previous book, I worried about the prospect of a new heroine, but found that Jack more than made for an adequate main character. Jack was a strong character; likable, capable and easy to follow. Having lived with so many [overprotective] brothers, Jack is capable of taking care of herself. She is a good shot, quick thinking and can outrun anyone, any day, but she's also a teenage girl. She has fears and insecurities; something living as a boy hasn't helped, but throughout Cured, as Jack searches for one of her brothers, she does grow and learn more about who she is.

Bethany Wiggins introduces us to new characters in Cured, with the character of Kevin a great introduction. Kevin is a mystery; plain and simple. Who is his and what his motives are is something that are constantly on your mind, but the sweet and endearing relationship he forms with Jack make for some addictive reading as Jack experiences her first taste of attraction and passion.

Cured explores another side to this world as Jack joins Kevin and some old favorite throughout the story. Wiggins thrilled me by including Fo and Bowen to the story and continuing to develop on their already amazing relationship, though they are no longer the central characters. Fo's brother Jonah also managed to worm in way into my heart in Cured and has me wondering if Bethany Wiggins might consider giving him his own happy ending one day.

Though very different personally I think Cured is as easily as good as Stung, and stood on it's own merit with endearing characters, a lovable heroine and a brilliant storyline. Bethany Wiggins continues to please with the second book in this series and has me crossing my fingers we'll get a third book as I'm just not ready to leave this beguiling world behind!

Source: Sent for review by Bloomsbury Australia (Thank you Sonia!)
Format: Paperback
Buy it: Bookworld | The Nile | The Book Depository | Amazon
My Recommendation: If you enjoy dystopian then you'll LOVE this!
Cover: I think it's very pretty--love the colour!
Will I read sequel/continue with series: I can't wait for more from Bethany Wiggins