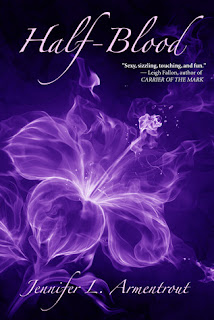 The Hematoi descend from the unions of gods and mortals, and the children of two Hematoi-pure-bloods-have godlike powers. Children of Hematoi and mortals-well, not so much. Half-bloods only have two options: become trained Sentinels who hunt and kill daimons or become servants in the homes of the pures.Seventeen-year-old Alexandria would rather risk her life fighting than waste it scrubbing toilets, but she may end up slumming it anyway. There are several rules that students at the Covenant must follow. Alex has problems with them all, but especially rule #1:Relationships between pures and halfs are forbidden.Unfortunately, she's crushing hard on the totally hot pure-blood Aiden. But falling for Aiden isn't her biggest problem--staying alive long enough to graduate the Covenant and become a Sentinel is. If she fails in her duty, she faces a future worse than death or slavery: being turned into a daimon, and being hunted by Aiden. And that would kind of suck.

Half-Blood by Jennifer L. Armentrout is a light, action packed debut that will appeal to fans of a good supernatural read.

Alright, so I’m not going to beat around the bush.....this book is a lot like Vampire Academy by Richelle Mead. And I mean a lot. There have been a lot of talk about this fact around the blogosphere due to this, so I’m not gonna go too heavily into it. Now Half-blood is well written and never lacks in action, but perhaps there were too many similarities between it and VA to allow me really love it. And in turn I’m left with mixed emotions about it. I can see the brilliance in some of it, but as VA remains once of my all time fave series I find it hard to let the similarities go. There are some thing’s I really love and others I’m just really disappointed in. The storyline read too much like a VA fanfiction tale and in turn the unique aspects to the story couldn’t hold up.

In this book Armentrout introduces us to Alex, a half-blood girl who has just has just seen her mother drained by a creature known as a Daimon. The lore in this book is interesting, although nothing I haven’t seen before. There were a few things here and there that jumped out at me, but the entire time I was reading I never found that ‘something’ I was looking for. It lacked the spark that really makes me love a book.
I liked Alex, but I’d be lying if I didn’t admit that at times she wore on me. It’s wonderful to have a strong, rebellious character, but I felt in this instance the author has taken it a bit to far. I found it difficult to like Alex as I was constantly annoyed by her choices and even her attitude issues which seemed pointless at times.

The other characters within the story were bland at worst and decent at best. Again, too much like VA for my liking. From their relationships with each other, their purpose within the book and the way they acted and interacted with each other....they were all people I felt I’d seen before.
The two characters I actually liked the most were Aiden our heroic love interest and Seth the mysterious guy who happens to be a part of Alex’s future. Aiden is everything I love in a love interest. He’s that aspect of forbidden that’s so alluring and that you can’t stay away from, while truly being a noble and good guy. Seth on the other hand is the enigma in the book for me. He didn’t have a massive role, but he was the one thing/person who stood out for me. What he is was unique to the story and the way he acted had me smiling and laughing. I mean, who doesn’t love that bad boy who appears to be more than he seems? He’s meant to be with Alex and although what they have is platonic right now, I think it’ll develop in the future.

In my opinion, this book blends Vampire Academy with Sherrilyn Kenyon’s Dark Hunter; not necessarily a bad thing, but a bit to much for my liking. Readers who can get past these constant similarities will love this book and although I had my issues I’m considering checking out the sequel when it’s released......(just to see what happens with Seth).

Source: I bought.
Format: Paperback.
Recommend: Only if you're a hardcore paranormal reader.
Recommend borrow or buy: Borrow.
Cover: It's nice, but doesn't stand out.
Read sequel/continue with series: Still undecided. Maybe, however not likely....