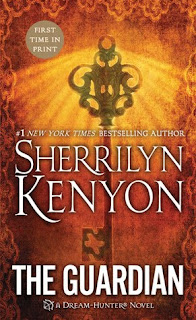 Dream-Hunter Lydia has been charged with the most sacred and dangerous of missions: To descend into the Nether Realm and find the missing god of dreams before he betrays the secrets that could kill her and her kind. What she never expects is to be taken prisoner by the Realm’s most vicious guardian…

Seth’s time is running out. If he can’t hand over the entrance to Olympus, his own life and those of his people will be forfeit. No matter the torture, Seth hasn’t been able to break the god in his custody. Then there’s the beautiful Dream-Hunter Lydia: She isn’t just guarding the gates of Olympus—she’s holding back one of the world’s darkest powers. If she fails, an ancient curse will haunt the earth once more and no one will be safe. But evil is always seductive...

This is by far my favourite Dream Hunter novel. They’ve always been the weakest of all the Dark Hunter books and I’m always hesitant when I pick one up, but The Guardian I thoroughly enjoyed! Kenyon writes another fantastic tale of pain and anger amidst a beautiful story of action, love and romance. In this novel we see so many elements of what make the Dark Hunter series so spectacular woven together as we see old friends and new ones.

From the very beginning I was drawn in and captivated by this story. There wasn’t a single dull moment and I was never bored or felt in a rush to finish the story. I liked that Sherrilyn Kenyon has built on her already incredible Dark Hunter world with the inclusion of Egyptian myth and lore. As if DH couldn’t be any cooler, she’s added a new layer of myth and gods—love it!

Seth was an absolute fantastic character. He’d been so much in his extremely long life and suffered so much. He’d done things that weren’t on par himself, but he had a really good idea of right and wrong and his morals were sounds despite all he’d been through. My heart broke for him while reading, really it did. It never ceases to amaze me the tormented, heinous pasts that Kenyon gives to her heroes. Every single one of them has lived lives full of pain and anguish and most never know kindness. Seth is no exception. It was heart-breaking learning of his life and seeing how badly he believed all the horrible things done to him. Even more so that he believed that he deserved to be treated that way and thought himself pathetic. No one should have such a low sense of self.

Lydia on the other hand had a pretty good hold on who she was. I’m not going to deny that once or twice I disliked how she acted, but for the most part I found her an enjoyable heroine. It was nice seeing her learn about Seth and her desire to protect him. She wanted something more for him and I liked that she didn’t break her promise to him.
I adored the romance that blossomed between these two. Perhaps I’m odd, but I enjoy prisoner/hostage scenarios that become something more over time. Things are never what they seem with these kinds of romance from Kenyon and I thought the one she developed in The Guardian to be awesome. It was wonderful watching these two characters learn about each other and trust one another. There was such a deep connection that formed as Lydia began to teach Seth about the world and Seth began to let Lydia into his heart. I truly felt their relationship at that point, but for some reason the love scenes fell flat to me, perhaps because we don’t get to read about Seth and Lydia make love for the first time, a scene that I was expecting to be really sensual and romantic. We know they were together and are as well later on, but the lack of that scene disappointed me.

While we’re introduced to our two new main characters, we are also allowed glimpses into old characters we love. It was fantastic seeing Jaden and Solin again; two characters whose stories I’m dying to see! Jaden is such a puzzle wrapped in an enigma surrounded by mystery. There’s so much we don’t know about him and throughout the series as little bits are revealed it’s become more intriguing and I’m eager to know more about this guy. And Solin! I was so not expecting his relationship with Lydia. Didn’t see it coming from a mile away. I’ve loved Solin since The Dream Hunter and ever since I’ve been dying for more of him. He’s a cocky, somewhat arrogant character, but you wouldn’t know it from his part in this book. He seemed like a completely different person and as such I’m even more eager to hear his story.

Overall this was a great story in the Dark Hunter series, but my only complaint would be that the ending. The whole book built to a point where things would turn sour for Seth once more and then it was just too easily resolved. Events with Lydia moved to swift and it turn the ending felt too rushed.
Still, all in all another great book from Kenyon and I can’t wait for the next one....

Source: I bought.
Format: Paperback.
Recommend: Yes.
Recommend borrow or buy: Buy.
Cover: I don't get it. It doesn't really connect to the story....
Read sequel/continue with series: Yes!