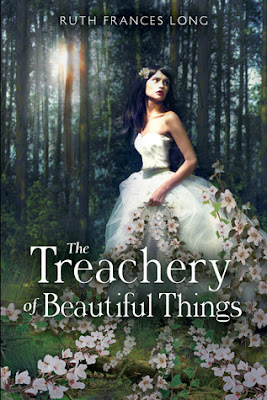 The Treachery of Beautiful Things by Ruth Frances Long
Released on: August 16th 2012
Add it: On Goodreads.

The trees swallowed her brother whole. And Jenny was there to see it. Years later, when she returns to the woods where Tom was taken to say good-bye at last, she finds herself lured into a world where stunning beauty masks the most treacherous of evils, and strange and dangerous creatures await—creatures who seem to consider her the threat. Among them is Jack, mercurial and magnetic, with allegiances that shift as much as his moods. Determined to find her brother, with or without Jack’s help, Jenny struggles to navigate a faerie world where nothing is what it seems, no one is who they say, and she’s faced with a choice between salvation or sacrifice—and not just her own.

Thoughts:
First off it was the cover that caught me in the beginning. It's so, so beautiful....and the story doesn't sound too bad either. I'm a sucker for anything Faerie. To be honest they're probably my fave supernatural creature. Forget vampires, forget werewolves, zombies, angels and everything else....faeries have my heart. Add in to the fact that it kinda reminds me of The Iron King and I'm sold. Looking forward to this one!

What are you waiting on this week. Leave me your links--I'd love to know!