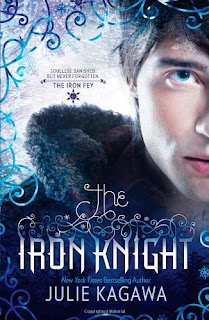 My name- my True Name- is Ashallyn'darkmyr Tallyn. I am the last remaining song of Mab, Queen of the Unseelie Court.

And I am dead to her.

My fall began, as many stories do, with a girl...

To cold faery prince Ash, love was a weakness for mortals and fools. His own love had died a horrible death, killing gentler feelings the Winter Prince might have had. Or so he thought.

Then Meghan Chase- a half-human, half-fey slip of a girl- smashed through his barricades, binding him to her irrevocably with his oath to be her knight. And when all of Faery nearly fell to the Iron fey, she severed their bond to save his life. Meghan is now the Iron Queen, ruler of a realm where no Winter or Summer faery can survive,

With the unwelcome company of his archrival, Summer Court prankster Puck, and the infuriating cait sith Grimalkin, Ash begins a journey he is bound to see through its end- a quest to find a way to honor his vow to stand by Meghan's side.

To survive the Iron Realm, Ash must have a soul and a mortal body. But the tests he must face to earn these things are impossible. And along the way, Ash learns something that changes everything. A truth that challenges his darkest beliefs and shows him that, sometimes, it takes more than courage to make the ultimate sacrific.

The Iron Knight marks a dramatic conclusion to Julie Kagawa’s Iron Fey series. Weaving together all the beauty and wonder that has made this series so captivating, The Iron Knight explores the darkest places of the Nevernever as Ash faces truths, challenges and revelations in his quest for a soul; racing towards a climax that will leave you breathless!

In all honestly I’m saddened to see this series come to an end, but I found this book to be a very fitting end to a series that has taken me on highs and lows, through danger and adventure, shown me love and heartbreak and ultimately captured me with each and every book. Julie Kagawa has created a gem right here, with a world and characters beautiful in their own rights and magic when she put them together. Every page, ever book has just gotten better and better and Kagawa proves she can still knock our socks off with more twists and turns, and shocks and revelations than I knew what to do with in this book!

There wasn’t a moment during Ash’s adventure that I was bored or able to be dragged away. It was stunning watching as he and Puck travelled far and wide as part of their journey to find Ash a soul. Of course it was fantastic seeing Puck (AKA Robin Goodfellow) return in all his pesky glory, creating more mischief and making me smile even when ten seconds before I’d wanted to cry. Brimming with old friends and new, all of which helped Ash in some way or another, this story takes us into the heart and head of Ash, allowing us a glimpse into the very depth of the Winter Prince. This book is an emotional roller-coaster ride as Ash faces his past in an attempt to find his future. Just when it seemed like we all knew what would happen with this book, Ash is faced with not one, but two equally difficult choices to make in his quest to return to Megan.

I really felt for Ash in this book—it was impossible not to, but I feel like he really cemented and proved why he is, and will always be, one of the best male leads in YA fiction. We’ve all known Ash had led a hard life, and had done some horrible things but in this book the reality really sinks in as we see the horrors Ash was a part of and the blood that once stained his hands. We must face the horror of his past with our hero as he attempted to pass his tests and return to his love. I think Ash grew so much in this book and it was brilliant to see.
Now I’m not going to go into a lot of detail for fear of giving too much away, but throughout the series we’ve watched Ash morn his lost love, even as he fell for Megan and in Iron Knight Ash faces a revelation and choice I doubt any of us readers ever expected he’d face. Julie Kagawa certainly knows how to pull our heart strings, but in the end Ash made the right decision. We all knew he loved Megan, but by throwing in this twist Kagawa has truly validated their love and proven that it really is the real deal; that it’s stronger than anything else.

There were heart-wrenching moments and throughout the whole book you truly do wonder how it will end. Nothing ever seemed safe, even towards the end of the book when everything seemed to come crashing down, before soaring higher and higher than before.
There’s been pain and tears, laughter and joy and heart-breaking sorrow, but in this book we finally find the ending we were all searching for as The Iron Fey series comes to a close. As we face the final chapter in what truly has been an incredible series, Kagawa delivers one of the best books and doesn’t disappoint as she ends the series with endless hope and possibilities and I’m sure leaves us all wishing we could get our hands on the spin-off right now.....

Source: Sent by Harlequin Teen Australia (Thanks sooo much Gabby!)
Format: Definitely!
Recommend borrow or buy: Buy!
Cover: Awesome--totally awesome!! Love seeing Ash!
Read sequel/continue with series: This was the final book in the series, but I'll be definitely be reading more by Julie Kagawa