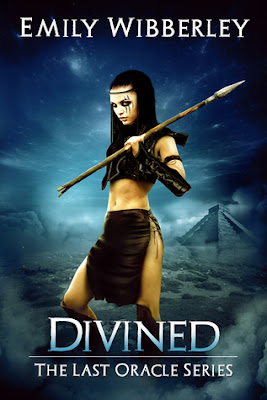 The epic conclusion to the Last Oracle Series…

Clio has forsaken the Deities and turned her back on her powers. Unable to trust her Visions, she is left alone and weak on the outskirts of Sheehan.

When the Emperor hears that an Oracle has survived in the Empire, he places a price on her head, forcing Clio to flee to the ancient city of Cearo. But the Deities have other plans for Clio, and it’s not long before she is faced with new foes, including a priestess with uncanny powers.

With rumors of unrest in the Empire growing and alliances within the nobles shifting, Riece seeks out Clio with a desperate plea. To protect the Empire, Clio will have to return to where her journey began—the sacrificial pyramid of Morek—to fight a new evil in an unimaginable form and confront the greatest enemy she's ever known: her father.

Divined is the third and final instalment in Emily Wibberley’s sensational Last Oracle series and is a fast paced, thrilling and fantastic way to end a series that has been captivating, engaging and edge-of-your-seat addictive from the very beginning.

Having turned her back on the Deities and forsaken her powers as the Oracle, Clio finds herself leaving Sheehan, weak and disheartened; hoping to protect those she loves for as long as possible. Yet when Riece tracks her down and asks for assistance regarding the growing unrest in the Empire, Clio soon learns that Morek and Sheehan are set to go to war against each other, and even worse…..a new and powerful enemy is determined to take over in Morek. Returning to the place Clio began her journey, she, Riece and their friends must take on an enemy unlike any they’ve ever known if they hope to stop immense bloodshed and stop a powerful Deity from destroying everything they hold dear….

Phew! What a story! After finishing this novel, I can honestly say there’s nothing I can really fault about it. Divined was everything I was hoping it would be; action packed, forward moving, romantic, charismatic and chemistry filled--Wibberley hit the nail on the head as she raced her characters towards a dangerous confrontation against a foe who you wouldn’t have necessarily expected them to face.

Well written and delightfully paced, Divined sees Clio make her final stand with alliances shifting, new friends made and powerful beings determined to take control of Morek and the neighbouring land of Sheehan. Emily Wibberley has taken Clio on one dangerous journey after another and she has grown a lot, becoming a stronger woman, a warrior and a fighter, but even Clio doubts and struggles in this novel; having to make big choices where success isn’t always guaranteed. Yet this stubborn heroine has never given up and I commend Wibberley for writing a heroine so likable, personable and enjoyable to follow.

In the desert land setting of Morek and Sheehan, we’ve seen Clio come a long way and alongside Riece, she’s wormed her way into my heart. Wibberley won me over the moment she introduced Riece to the series; a confidant and charming young Commander who has had a terrific chemistry alongside Clio since the moment they met. Forced apart time and time again due to reasons that weren’t always within their control, Clio and Riece sizzle whenever they’re together and Divined is no exception to this rule with plenty of fabulous scenes that are full of the Riece and Clio fire and passion I’ve come to love! Theirs is the best kind of forbidden I love and I can’t adore them more.

Divined is a very entertaining novel. Clio and Riece are supported by a vast array of characters who make up a brilliant ensemble of characters. Ixie, Ashira and Derik have always been wonderful and the inclusion of Ealis was a great addition to the story that sees another of our characters find unexpected happiness—after a lot of delicious tension and back and forth banter that is!

Heart felt and powerful, Divined isn’t without its loss, as no epic and final confrontation would be. Emily Wibberley doesn’t spare her characters from pain, but in the midst of a fast paced novel with plenty of twists and developments, gives us an ending she should be darn proud of…..that allows us to rest knowing Clio, Riece and those they love will live happily ever after.

If you haven’t read this series, now is the perfect moment to start The Last Oracle trilogy and fall in love with this luscious, dangerous and completely addictive world Emily Wibberley has penned. Highly recommend!

Source: Sent for review by the author (Thank you Emily!)
Format: Kindle ebook
Buy it:  The Book Depository | Amazon | Barnes & Noble
My Recommendation: This series is a must read for fantasy fans.
Cover: The covers in this series rock and this one is no exception.
Will I read sequel/continue with series: Unfortuntely this is the last book in the series but I'll read anything Emily Wibberley releases next without hesitation!!