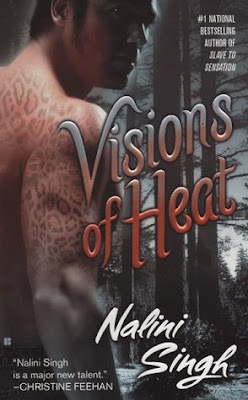 Used to cold silence, Faith NightStar is suddenly being tormented by dark visions of blood and murder. A bad sign for anyone, but worse for Faith, an F-Psy with the highly sought after ability to predict the future. Then the visions show her something even more dangerous - aching need...exquisite pleasure. But so powerful is her sight, so fragile the state of her mind, that the very emotions she yearns to embrace could be the end of her.

Changeling Vaughn D'Angelo can take the form of either man or jaguar, but it is his animal side that is overwhelmingly drawn to Faith. The jaguar's instinct is to claim this woman it finds so utterly fascinating and the man has no argument. But while Vaughn craves sensation and hungers to pleasure Faith in every way, desire is a danger that could snap the last threads of her sanity. And there are Psy who need Faith's sight for their own purposes. They must keep her silenced - and keep her from Vaughn.

Visions of Heat is the second book in the Psy-Changeling series by Nalini Singh and gives its predecessor a run for its money where sensuality, romance and daring excitement are concerned!

Visions of Heat follows DarkRiver sentential and jaguar Vaughn D’Angelo, a changeling more animal than man, and Faith NightStar, a F-Psy who has visions of the future and whose business predictions have made her the most valued F-Psy in existence. Kept in a heavily guarded compound for her protection, when Faith begins have visions of horrible murders she makes the difficult choice to venture into DarkRiver territory in the hopes of finding assistance, unaware that everything she knows about herself and her world is about to change forever.

Having enjoyed the first book, Slave to Sensation so much, I was delighted to discover that Visions of Heat was as good as the first book, and maybe even better. In fact, I think I liked it better than the first! Nalini Singh continues to sweep me up with this series and I find myself more excited about the prospect of delving further into Singh’s world and her other characters. Sometimes that’s the beauty of reading a series long after it’s been released—I know who I will have the pleasure of reading about and I can jump straight from one book to the next.

I really loved both the main characters in this book. Faith was a real sweetie who grew and began to learn more than her Psy conditioning taught her. I loved seeing her become stronger with the more time she spent with Vaughn and the DarkRiver Pack and felt she was a very fitting mate for Vaughn.

As for Vaughn, well, in the first novel, Vaughn was someone I wasn’t completely sure about. He seemed wild and cold, but as I got to know him in Visions of Heat, I absolutely fell in love with him. Vaughn is awesome! Seriously. He’s fierce, dependable and dangerous, but he’s also so kind when it comes to Faith and this quickly won me over.

There’s something so thrilling about seeing a powerful and dangerous male brought to his knees by a female. Seeing the internal fight they often experience against what they want and what they can’t deny—it’s delectable. Especially when the two involved are from opposing sides or races; it adds this added extra of forbidden and then satisfaction when the two eventually give in. And that’s exactly what happens during Visions of Heat—Vaughn and Faith can’t help but be drawn to one another, regardless of the fact he’s changeling and she’s Psy.

Faith and Vaughn were a great couple to read about. They had good, solid chemistry and Nalini Sinbgh writes some very sensual sex scenes between them. I really loved seeing Vaughn introduce Faith to touch and see her begin to yearn for the jaguar in him.

Another great book in the Psy-Changeling series, Nalini Singh is currently two from two and I can’t wait to jump straight into the next novel and discover Judd and Brenna’s story next!

Source: I bought from The Book Depository
Format: Paperback
Buy it: Bookworld | The Nile | The Book Depository | Amazon
My Recommendation: For fans of brilliant PNR!
Cover: Decent, but not anything spectacular.
Will I read sequel/continue with series: Yes!