I'm super excited to be participating in the book blitz for Tone Deaf by Olivia Rivers presented by YA Bound Book Tours! Tone Deaf has been a book I've been eagerly awaiting and I really hope to have the chance to read it myself. It was actually my WoW a few weeks back! Hope you enjoy the fabulous excerpt I have :) 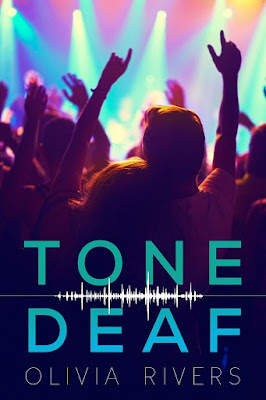 His world is music. Her world is silent.

Ali Collins was a child prodigy destined to become one of the greatest musicians of the twenty-first century—until she was diagnosed with a life-changing brain tumor. Now, at seventeen, Ali lives in a soundless world where she gets by with American Sign Language and lip-reading. She’s a constant disappointment to her father, a retired cop fighting his own demons, and the bruises are getting harder to hide.

When Ali accidentally wins a backstage tour with the chart-topping band Tone Deaf, she’s swept back into the world of music. Jace Beckett, the nineteen-year-old lead singer of the band, has a reputation. He’s a jerk and a player, and Ali wants nothing to do with him. But there’s more to Jace than the tabloids let on. When Jace notices Ali’s bruises and offers to help her escape to New York, Ali can’t turn down the chance at freedom and a fresh start. Soon she’s traveling cross-country, hidden away in Jace’s RV as the band finishes their nationwide tour. With the help of Jace, Ali sets out to reboot her life and rediscover the music she once loved.

I take a deep breath and close my eyes, just for a moment, just long enough to regain my composure. When I open them, I'll be calm. I'll forget about Jace's insults and the memories he stirred up. I'll take the check and run far, far away.

Something lightly touches my shoulder, making me yelp in surprise. I snap my eyes open and find Jace in front of me. He has his hands nervously stuffed in the pockets of his jeans, and he's wearing a long-sleeved shirt now. Why did he change into that, of all things? It's still like eighty degrees outside, and his forehead is already covered in sweat. Maybe the dude is some sort of masochist; he hurts everything and everyone, including himself.

His throat bobs as he clears it, and he shuffles around for a couple seconds, his eyes glued to his feet. I stay exactly where I am, doing my best to look intimidating as I stare up at him. I think of how my mom used to laugh when I was learning a new song; she said I looked ferocious when I concentrated that hard. I try to channel that expression and glare straight at Jace.

Jace stares down at his hands, holding them far in front of him, like they have some sort of terrible disease he's afraid to catch. Then he pushes up his sleeves, even though they're already scrunched up around his muscular biceps. He takes a deep breath, and I step to the side, wondering what in the hell is going on. He's not even talking. He's just standing there, occasionally shooting me little glances that almost look . . . scared.

He keeps staring at his hands for a bit longer, and then he takes a shuddering breath. “Hey.”

Jace shakes his head and takes a step toward me. He keeps coming closer, until he's only a foot away. He peers closely at me, his eyes squinting as he examines my face. I unconsciously reach up and cover my cheek with my hand, hiding the bruised area from sight.

“It looks like someone hit you,” Jace says, gesturing to my cheek. '

He points to my arm. “ You're bruised there, too.”

“It was just an accident,” I insist.

“And it's definitely not your business.”

Jace takes another half-step toward me, bringing us impossibly closer. Finally, he looks into my eyes, and I'm able to see his full expression. It's not right. Jace is supposed to be angry and condemning and pitiless. But his eyes are . . . sad.

He raises his hands, gives them one more disgusted glance, and then signs,  "Let me help you.” 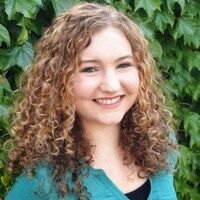 Olivia Rivers is a hybrid author of Young Adult fiction. Her works include the independently published “Tortured Elements” and “Duplicity” series, along with the traditionally published novel “Tone Deaf” (Skyhorse 2016.) As a certified geek, she enjoys experimenting with new publishing technologies, and her online serials have received over 1,000,000 hits on Wattpad.com. When Olivia isn’t working as a writer, she’s a typical teen attending college in Northern California. Olivia is represented by Laurie McLean of Fuse Literary, and nothing thrills her more than hearing from readers.