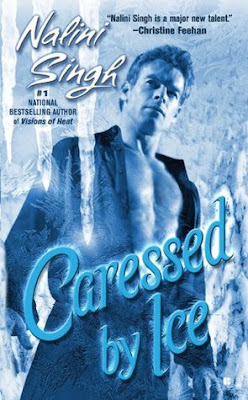 Nalini Singh explores new heights of sensuality, returning to the world of the Psy - where two people who know evil intimately must unlock the good within their icy hearts...

As an Arrow, an elite soldier in the Psy Council ranks, Judd Lauren was forced to do terrible things in the name of his people. Now he is a defector, and his dark abilities have made him the most deadly of assassins - cold, pitiless, unfeeling. Until he meets Brenna...

Brenna Shane Kincaid was an innocent before she was abducted - and had her mind violated - by a serial killer. Her sense of evil runs so deep, she fears she could become a killer herself. Then the first dead body is found, victim of a familiar madness. Judd is her only hope, yet her sensual changeling side rebels against the inhuman chill of his personality, even as desire explodes between them. Shocking and raw, their passion is a danger that threatens not only their hearts, but their very lives...

Caressed by Ice is another brilliant instalment in Nalini Singh’s Psy-Changeling series and this time tells the romance of Psy Judd and changeling Brenna in a sensual and addictive read!

Judd Lauren is one of the coldest Psy’s in existence. His unique, and dangerous telekinetic abilities have made him a deadly assassin and despite his defection from the PsyNet, Judd has held tight to the Silence that helps him control himself. As one of the Psy Councils elitist of soldiers, he was forced to do terrible things and remaining unfeeling and cold has kept him sane….until he met Brenna. Brenna Shane Kincaid was a bright and vibrant young woman until she was abducted and tortured in the most heinous of ways by a Psy killer. Rescued, but left forever changed, Brenna is struggling to move past what was done to her, surprising everyone by finding comfort in Judd—a Psy known for his cold nature. Determined to prove to both Judd, and herself that their relationship can work, Brenna finds herself on the road to recovery at the same time a new threat appears to the wolf pack, and this time the killer may be a lot more closer to home….

Yet another brilliant read. Honestly, Nalini Singh is yet to disappoint me with her fabulous characters, outstanding romances and a storyline that allows us to focus on one couple at a time while still getting to know those around them and seeing those we’ve already followed. All my fave characters were back in Caressed by Ice, and I’m only beginning to anticipate their own stories more and more. Hawke and Dorian are standouts for me, but I’m also becoming more eager to follow Indigo, Sienna (although I know she’ll be paired with Hawke) and Mercy.

With Caressed by Ice told through varying POV’s, I found our main characters Brenna and Judd to be wonderful characters to follow and I genuinely enjoyed reading their story. It was addictive, exciting, sensual and enticing—Brenna and Judd had great personality individually and excellent chemistry together. Brenna was someone I easily liked and I enjoyed seeing her find her feet after everything she went through at the hands of Enrique. She was kind but sassy and I adored her fierce determination to be with Judd regardless of what anyone thought.

As for Judd, well…..I found it hard not to warm to Judd—he was known as the Man of Ice and I certainly enjoyed watching him thaw. As someone who had denied his emotions and basic male needs for so long, seeing Judd began to feel, and want was so fulfilling. Singh wrote him in a way that it was impossible not to be drawn to this sexy solider with a tainted past.

I thought it was very clever how Singh wrote Judd’s journey to separation from Silence. Unlike our previous Psy main characters whose abilities made them different and saw them empathetic already, Judd embraced the control Silence allowed him to have prior to the events of Caressed by Ice. His reliance to Silence meant that experiencing emotion was actually painful and caused real physical and internal injuries to Judd as he began to fight Silence. Having been conditioned the way he has, Judd’s mind and body weren’t capable of feeling the emotions he began to want to feel and as a result, he began to deteriorate. I won’t give away spoilers, but I found it really well written, explained and then solved on Nalini Singh’s part.

Impressively written and so good, Caressed by Ice was another brilliant Psy-Changeling novel. So far Nalini Singh has done nothing but capture my attention in its entirety and I’m beyond looking forward to the rest of the series. I’m already in love with all the characters and her world and can't wait to read the rest of the novels in this delectable series!

Source: I purchased from The Book Depository
Format: Paperback
Buy it: Bookworld | The Nile | The Book Depository | Amazon
My Recommendation: This is a must read PNR
Cover: This cover I so old school looking--very vintage.
Will I read sequel/continue with series: YES!