Welcome to the Book Blitz for The Neverland Wars by Audrey Greathouse thanks to Xpresso Book Tours! Gotta love a Peter Pan retelling. Enjoy the excerpt and the tour wide giveaway I have for you today. 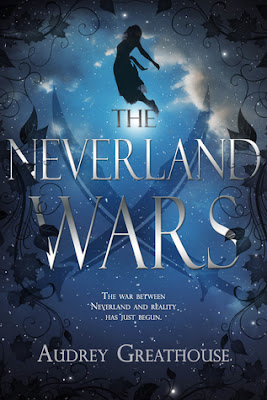 Magic can do a lot—give you flight, show you mermaids, help you taste the stars, and… solve the budget crisis? That’s what the grown-ups will do with it if they ever make it to Neverland to steal its magic and bring their children home.

However, Gwen doesn’t know this. She’s just a sixteen-year-old girl with a place on the debate team and a powerful crush on Jay, the soon-to-be homecoming king. She doesn’t know her little sister could actually run away with Peter Pan, or that she might have to chase after her to bring her home safe. Gwen will find out though—and when she does, she’ll discover she’s in the middle of a looming war between Neverland and reality.

She’ll be out of place as a teenager in Neverland, but she won’t be the only one. Peter Pan’s constant treks back to the mainland have slowly aged him into adolescence as well. Soon, Gwen will have to decide whether she’s going to join impish, playful Peter in his fight for eternal youth… or if she’s going to scramble back to reality in time for the homecoming dance.

A chill crept down Gwen’s spine, and her eyes could not refocus fast enough. She clutched fistfuls of Rosemary’s quilt, instinctively preparing to throw herself under it if there was a monster lurking in the dark. Gwen wasn’t afraid in the normal sense of the term, but her heart raced as she noticed the boy sitting on the rocking chair in the corner of the room.

The chair rocked with a squeak as he stood up from it. Walking slowly toward the window, he came into view as he entered the moonlight. He stared at Gwen, and she stared back.

His eyes were steady in their intensity, but impish in all other manners. They impulsively surveyed the room, never lingering on any particular aspect of it, but always coming back to Gwen. A vine of ivy was wrapped around his waist and strewn across his shoulder like a belt and sash, just barely holding his tattered shirt and shorts to him. His clothes seemed held together with bits of twine and magic. He moved fluidly in his own skin. Gwen wasn’t even conscious of how much she envied his playful motion. Even with his gangly, broad shoulders, he stood tall with a childish sense of confidence.

Gwen wasn’t sure, but he looked like a freshman. He couldn’t have been younger than fourteen.

He wore hemp bracelets and braided jewelry around his wrists; pine-cone chips and wooden beads were woven into his necklace. They jangled as he walked.

“This is your sister?” he asked, his question seemed rudely incredulous. “Hollyhock, let me see her.”

Before Gwen could make sense of this remark, an exploding light burst from an inexplicable place in the darkness. Gwen was disoriented when the light came so quickly at her. Circling up around her, the golden light left a trail of fast dissolving glitter that rained down on her. What little of it touched her glowed faintly on her skin before disappearing. It felt like a pins-and-needles numbness in the best possible way.

The bright light that radiated from Hollyhock’s little body half-blinded Gwen in the otherwise dark room, but Hollyhock flitted in front of her, and Gwen caught a glimpse of the creature. Her eyes were unusually wide, and her massive irises were an otherworldly color for which Gwen had no name. Her itty-bitty lips and nose were hardly there at all, but her sunny hair was pulled back in two long, dangling braids. Her limbs were like twigs, and she wore a leaf draped over her like a tunic. Gwen didn’t need to be told that she was looking at a fairy.

“Huh,” he responded, sitting down on the hardwood floor of Rosemary’s room. “You said your sister was a kid.”

Finally addressing her properly, Peter spoke to Gwen in a condescending tone. “I expected you to be younger.”

“As did I of you,” Gwen curtly returned.

Peter, the young man, shrugged with his eyebrows and looked away, indicating that he was not going to bother engaging a hostile girl.

Gwen didn’t care. She couldn’t have cared. While Hollyhock played in the fish mobile above the bed like an aquatic merry-go-round, Gwen clutched Rosemary close to her. “Rosemary, we were so worried! Thank God you came back.”

“I had to come back, Gwenny,” Rosemary told her. “I had to come back for you.” Hollyhock, tiring of the mobile, zipped back down and buried herself in Rosemary’s hair, poking her head out of it and trying to part it like curtains. Rosemary giggled, taking Gwen’s hand. “Let’s go.”

“Whoa, wait, no.” Gwen grabbed hold of Rosemary’s arm. “We’re not going anywhere. Mom and Dad are worried about you. The cops were here… You can’t go—where?”

Hollyhock, on Rosemary’s shoulder, said something that sounded like a sneeze and a hum. Rosemary translated the one word she had already learned in the fairy tongue. “Neverland.” 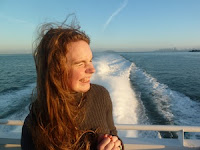 Audrey Greathouse is a lost child in a perpetual and footloose quest for her own post-adolescent Neverland. Originally from Seattle, she earned her English B.A. from Southern New Hampshire University's online program while backpacking around the west coast and pretending to be a student at Stanford. A pianist, circus artist, fire-eater, street mime, swing dancer, and novelist, Audrey wears many hats wherever she is. She has grand hopes for the future which include publishing more books and owning a crockpot. You can find her at audreygreathouse.com