Book Shelf: Learning to Swim (Hearts Out of Water #1) by Annie Cosby 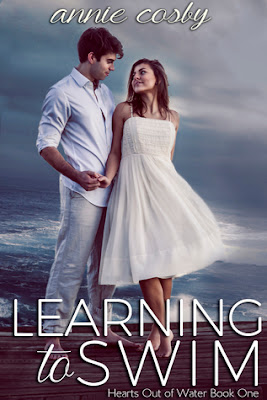 When Cora’s mother whisks the family away for the summer, Cora must decide between forging her future in the glimmering world of second homes where her parents belong, or getting lost in the bewitching world of the locals and the mystery surrounding a lonely old woman who claims to be a selkie creature—and who probably needs Cora more than anyone else.

Through the fantastical tales and anguished stories of the batty Mrs. O’Leary, as well as the company of a particularly gorgeous local boy called Ronan, Cora finds an escape from the reality of planning her life after high school. But will it come at the cost of alienating Cora’s mother, who struggles with her own tragic memories?

As the summer wanes, it becomes apparent that Ronan just may hold the answer to Mrs. O’Leary’s tragic past—and Cora’s future.

Learning to Swim by Annie Cosby is a delightful contemporary read with a paranormal undertone that will sweep you up on a summer adventure set in a pleasing coastal town.

Cora Manchester is just trying to figure out what she wants to do with her future when her mother whisks the family away to spend the summer in the small town of Oyster Beach, hoping to re-connect. Staying in a horrendously pink house and spending time with other vacationing families much like her own, Cora seeks an escape with the town’s locals. Quickly striking up a friendship with Mrs O’Leary, a kind but lonely old woman who tells tales of mythological creatures and who struggles to see the line between fantasy and reality, Cora spends her days near the ocean, learning of magical creatures within the sea. Until she meets Ronan, a local boy who makes her heart race like never before and whose connection to Mrs O’Leary is one Cora never could have expected……

Learning to Swim was one of those books that really was just a delight to read. The novel was well written and flows nicely. It’s not the fastest paced novel I’ve ever read but rather flows at a steady pace. Learning to Swim was easy to read and it seemed effortless to follow the likable characters and steadily learn about their lives and their stories. Annie Cosby weaves some Celtic and Gaelic history into the tale and throws us the perfect hint of paranormal to compliment the story. Tales of mythology and paranormal creatures litter the book thanks to fantastical Mrs O’Leary, but as the reader you’re never sure whether the stories are just that; stories….or maybe hints at something more?

Filled with different characters with plenty of personality, Learning to Swim follows a decent main character in Cora. Cora is your typical teenage girl on the brink of adulthood, and as such Cosby writes her that way. Spoilt and given everything by her parents—bar her freedom—Cora will at times frustrate and baffle you, but there’s no doubt in my mind that Cora is a character who grows a lot and ultimately learns in this novel.

Annie Cosby gives Cora a love interest in the form of Ronan, who really isn’t who he seems. I quite liked the attraction that simmered between her and Rory that saw them bicker in the beginning and then slowly bond with their friendship with Mrs. O’Leary. Cora and Rory were a sweet couple and I appreciated the way Cosby wrote them.

Learning to Swim sees Cora learn some interesting truths about the world around her, but it’s not until the very final chapter that the biggest revelation and development comes to light. Personally there were certain things I put together early on, but that only made me more excited when Cora finally finds out herself.

Ending with a cliffhanger at a big moment, Learning to Swim will leave you without a doubt raring to dive into the next book to discover what happens to Cora and Rory next!

Source: Sent for review by the author (Thank you Annie!)
Format: Kindle ebook
Buy it:  The Book Depository | Amazon | Barnes & Noble |
My Recommendation: For fans of Amanda Hocking's Watersong Quartet and fantasy
Cover: This cover is beautiful. I really like it.
Will I read sequel/continue with series: Yes. Looking forward to reading more.