Book Shelf: Fall with Me (Wait for You #4) by Jennifer L. Armentrout 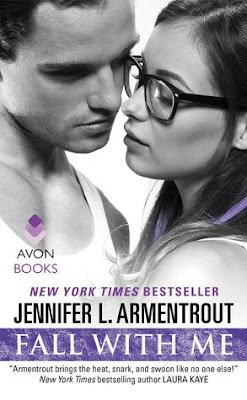 Eleven months ago, bartender and weird-shirt-wearing extraordinaire Roxy and Officer Reece Anders had a one night stand. Well, kind of. She’s been in love with him since she was fifteen, and he wishes that night they shared never happened. She’s sworn him off forever, but the past and future collide, forcing her to rely on the one man who broke her heart not once, but twice.

Her best friend since birth has been in a long-term care facility since he became a victim of a hate crime years ago, and the person who put him in there is out of prison and wanting to make amends with him and Roxy. She’s not sure she has room for forgiveness in her and when she begins to receive frightening messages and is on the receiving end of escalating violence, she thinks she knows who is to blame. The man who already destroyed one life already.

But Reece isn’t convinced. The threats are too personal, and even if Roxy doesn’t believe him, he’s not willing to let anyone hurt her. Including himself. He’s already messed up more than once when it comes to Roxy and he’s not going to let history repeat itself.

Fall With Me is the fourth instalment in Jennifer L. Armentrout's widely popular Wait for You series and is another heady tale of passion, romance and sensuality, woven together with Armentrout's trademark wit, humor and character development!

The Wait for You series is one of my favorite NA series out there and I never fail to fall in love with what Jennifer L. Armentrout writes where this series is concerned. Fall With Me is another great addition to the series and this time follows Roxy and Reese, characters we met in Calla and Jax's previous tale.

Bartender Roxy has been in love with Reece Anders since she was a teenager. Close friends for years, Roxy always assumed police officer Reece saw her as a little sister. Until a drunken night together opens her eyes to the way he may feel, but ends horribly when Reece jumps to conclusions about what transpired between them; the results of which see Roxy's and his relationship destroyed. Fast forward eleven months and Roxy is still furious with Reece, but unable to deny that she still wants him, especially when he makes it clear he's ready to be with her for real. Throw in a possible stalker and the man who hurt her best friend years before being released from jail, Roxy finds herself facing some big decisions and only if she lets Reece in will she finally be able to find true happiness.

Wonderfully written, Jennifer L. Armentrout weaves together a great romance story that will easily bring a smile to your face. Personally, I don't think Fall With Me is my favorite, but it's still a great read! I adore the way Armentrout writes her characters and the way she manages to weave so much humor, banter and fantastic one-liners into the story. There's great dialogue as always and some very sensual sex scenes between Roxy and Reece.

Roxy is a really quirky character and so great to follow! She has her own unique personality and way of seeing the world, and her voice within the story is distinct. I thought Armentrout wrote her really well and appreciated that Armentrout gave her great relationships with her friends, family and work colleagues. It's wonderful to see a strong family and work dynamic, and that's what we see within Fall With Me.

Any woman who states she hasn't had a police officer fantasy at one point of another is lying. I mean, come on....there's something oh, so sexy about the presence, the power, the strength that comes from a man in uniform and Officer Reece Anders has all this in spades. Jennifer L. Armentrout writes him beautifully and pens a great relationship between he and Roxy.

Roxy and Reece as fun and sexy and oh, so perfect together. They compliment each other, but I love the way Armentrout have them some history as teenagers and how this foundation made for a great stepping stone into a physical, romantic relationship. They're funny and charming together and the endearing moments between them are at a perfect balance between the steamy ones.

Fall With Me makes a great addition to a brilliant continuing series and with Fall With Me ending perfectly, I am sooooo excited to read Nick's story next, especially knowing he's being partnered with Stepanie; someone I've wanted to know more about since Teresa and Jase's book, Be with Me. Bring on Nick and Steph!

Source: I purchased from The Book Depository
Format: Paperback
Buy it: Bookworld | The Nile | The Book Depository | Amazon
My Recommendation: A brilliant NA series--one of the best!
Cover: Love it!
Will I read sequel/continue with series: Yes! Can't wait for more.