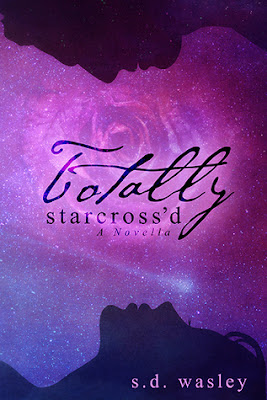 Romilly longs for the freedom to live her own life ... but her dad is Alan Montague, hot contender for the job of Governor. And the bigger he gets, the more protective of Romilly her parents become.

Could Julian Capulet’s luck be worse? As if being born into the most conservative family in Verona wasn't bad enough, the girl of his dreams is the daughter of his father's biggest adversary in the upcoming election. His embarrassing family—especially his troublemaking younger brother—seem set to totally ruin his chances with Romilly.

For Romilly and Julian it’s never been truer that you can choose your friends but not your family. Will this story end in woe—or can there be a happily ever after for this modern-day Juliet and Romeo?

A modern day retelling of Shakespeare’s Romeo and Juliet.

Totally Starcross’d is a delightful novella by S.D. Wasley that retells the famous William Shakespeare play Romeo & Juliet and introduces readers to the star crossed lovers in a way like never before!

Romilly Montague’s father is Alan Montague and is a strong contender for the Governor of Verona. Beautiful, smart and kind, Romilly longs for freedom, but it’s not until she meets an alluring boy at a political event that she feels her heart flutter. Julian Capulet doesn’t support his father’s political ideals at all—in fact he’d rather not see his dad beat Alan Montague in the race for Governor. The eldest son in a very conservative family, Julian isn’t expecting to meet Romilly, or be unable to get her out of his head. Their fathers are political adversaries and their families at war, but Romilly and Julian quickly become smitten with each and refuse to be torn apart, whatever the consequences…..

I was very impressed with this novella by S.D. Wasley. Almost everyone is familiar with the classic tale of Romeo and Juliet in some way, shape or form but Wasley gives it a little bit of a shake up with Totally Starcross’d. Though short in length, Totally Starcross’d is well written and paced. Romilly and Julian’s romance moves swiftly, but feels very believable too.

Totally Starcross’d manages to be very fun and light, and the gender switches of the characters was very clever on Wasley’s part. I liked that Totally Starcross’d was set in modern times and was relevant in today’s society. Wasley managed to competently retell Romeo & Juliet and touch on all major moments and characters in this tale. Romilly and Julian were likable and their romance sweet—unlike the original tale I didn’t find myself wanting to strangle the characters for their ill-fated choices.

Fresh and fun, Totally Starcross’d is a quaint twist on Romeo and Juliet that progresses nicely and doesn’t end at all in the way you’d expect. Nicely done S.D. Wasley!

Source: Sent for review by the author (Thank you Sasha!)
Format: Kindle ebook
Buy it: Amazon
My Recommendation: If you enjoy contemporary reads and like Shakespearian twists, you'll want to read this.
Cover: I think this cover is absolutely beautiful!
Will I read sequel/continue with series: This is a standalone tale, but I'll be reading more by S.D. Wasley in the future without a doubt.