Having posted my 5 star review of Soulless by Jacinta Maree yesterday, I'm happy to be showcasing the novel today as part of the Blog Tour hosted by Xpresso Book Tours!

I actually had the pleasure of meeting Jacinta at Oz Comic Con last year and she was absolutely lovely! I managed to snag copies of her My Demonic Ghost series then too, so I'm gonna try and read them soon too, having loved Soulless so! 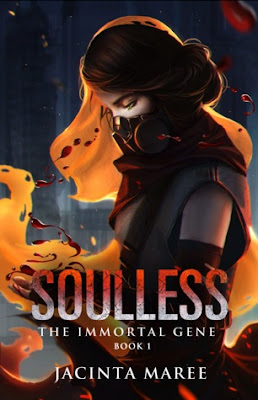 Welcome to Soulless.
We are the generation that laughs at death.


Reincarnation; what was once considered a gift of immortality has become an eternity of nightmares.

Nadia Richards lives in a world plagued by reincarnation, a system of recycling souls where all past memories, personalities and traumatic events are relived daily in disjointed sequences. Trapped within their own warped realities, not even the richest and most powerful are saved from their own minds unraveling. Madness is the new human nature, and civilizations are crumpling beneath themselves trying to outrun it.

Within a society that ignores death, Nadia appears to be the one exception to the reincarnation trap. Born without any reincarnated memories and with printless eyes, the hot tempered 19 year old quickly becomes the ultimate prize to all those wishing to end the vicious cycle, or for some, to ensure they could evade death forever.

Diesel scowled as though a bad thought had been gnawing at him for hours.  He reached down and pulled me into a stand by my elbow. "This conversation is over." He yanked me around with him as he turned, "Come, I want to talk to you in private."

His fingers dug into my arm as he ushered me away from the camp fire. As I walked, a sense of unease filled me. He didn’t speak when I pulled against him, "What’s your problem?" His rage bruised my skin and I jerked myself out of his grip. "Let me go! What’s gotten into you?"

Diesel’s palm lashed outwards, hitting me so hard in the chest that I gasped. The impact shoved me back into the tree as Diesel held his forearm to my throat, pinning me against the trunk. The flash of his blade caught the moonlight as the chilled metal nipped my neck. Immediately, I clenched up, automatically holding my breath as Diesel’s face blurred in with the shadows.

I could only see his eyes beneath the mane of hair, and how his lips pulled back to bare his teeth. "Alright, enough of this bullshit!" He was so close that I could feel his body heat through my clothes.

I inhaled a sharp breath and stretched my neck away. "What are you doing?"

"Don’t fuck with me! I know you’re up to something!"

"What?" I caught his gaze.  The shadows sunk into every dark speck of his intense stare. He looked crazed. "What the hell are you talking about?"

"Listen carefully because I’m not going to repeat myself. You do not want to mess with me." He pressed his forearm in a little harder, squeezing my throat. "I’m always going to be two steps ahead of you, so whatever you’re planning you can just forget it."

"I’m not… planning… anything! Stop… stop I can’t breathe!" He eased back and I gasped loudly. Adrenaline pumped into my body, swelling my head with panic. "What the hell is wrong with you, you lunatic?"

Diesel didn’t say anything. He just looked at me. He looked at me like I was a walking, talking dog that he couldn’t figure out what to do with. He kept the blade near my throat, but for a split second, I forgot it was there. "You’re unbelievable! The others were right. You’re ... you’re just some psychopath."

"No, no I’m not the crazy one here. I know you’re planning something. I know the look of a back stabber when I see one."

Diesel inched closer as the prick of the blade pressed into my voice box again.  The way he looked so intensely into my eyes was like he was trying to stab me with them.

"If I’m such a raging lunatic, then why would you come back to me?"

My gaze hardened. What the hell does that mean? Diesel must have seen the confusion cross my face as his brows tightened. "Why did you come back?"

The question shocked me that my jaw dropped a little. "I don’t understand—"

He snarled, "Back in Chinatown, when we were jumped by Twiddle Dumb and Twiddle Dee, there was no way I could follow you. You were out on the streets, you had the contacts, and you were free to go anywhere you wanted. I want to know why? Why did you come back? What do you really want?"
The words choked up in my throat as though I was swallowing rocks. Had this been bugging him the whole time? I vaguely remembered the look of distrust he had the moment I returned to the room. I didn’t think too much of it back then, but now it made sense.

"If it makes you feel any better, I did contemplate on running, but I figured it was pretty dog of me to ditch you."

He shook his head and pressed the sharp tip closer into my throat, "That’s not an answer."

Born in Melbourne Australia, Jacinta Maree considers herself a chocoholic with an obsession with dragons, video gaming and Japan. She writes a variety of genres including YA paranormal, steampunk, horror, new adult, dystopian and fantasy. Winner of 2014 Horror of the year and bestselling author, Jacinta writes to bring enjoyment to others while fulfilling her own need to explore the weird and the impossible.

a Rafflecopter giveaway Soulless was an incredible book and I can't recommended it enough--seriously, get yourself a copy of this book, you won't be sorry!