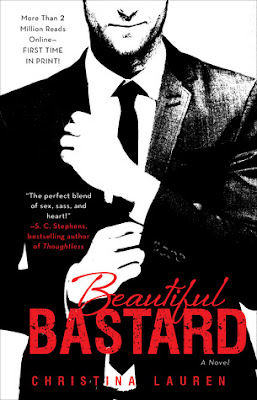 An ambitious intern. A perfectionist executive. And a whole lot of name calling.

Whip-smart, hardworking, and on her way to an MBA, Chloe Mills has only one problem: her boss, Bennett Ryan. He's exacting, blunt, inconsiderate—and completely irresistible. A Beautiful Bastard.

Bennett has returned to Chicago from France to take a vital role in his family's massive media business. He never expected that the assistant who'd been helping him from abroad was the gorgeous, innocently provocative—completely infuriating—creature he now has to see every day. Despite the rumors, he's never been one for a workplace hookup. But Chloe's so tempting he's willing to bend the rules—or outright smash them—if it means he can have her. All over the office.

As their appetites for one another increase to a breaking point, Bennett and Chloe must decide exactly what they're willing to lose in order to win each other.

I remember I had an opportunity to read and review this novel when it was first published here in Australia and I didn’t take Simon & Schuster up on it. Looking back I don’t regret this decision. I’m actually glad I purchased a copy now because I was only just beginning to read NA/adult contemporary novels and I think the high use of sex scenes and the intensity of this story might have been lost on me back then. That being said; I certainly enjoyed Beautiful Bastard and found myself eagerly turning pages!

Beautiful Bastard introduces readers to Chloe Mills, a smart, capable business intern who is hardworking and sharp tongued and whose only issue in life seems to be her boss--the arrogant, inconsiderate Bennett Ryan and someone who has recently returned from time overseas to take a lead role in his family’s media business. Bennett is hateful and blunt and manages to bring out the absolute worst in Chloe….so why can’t she stop her lust driven reactions she has to him that leave her at his mercy? Especially after they cross the line that sees them devour each other…all over the office and then some! Intense and infuriating, Chloe and Bennett have begun a game that both are desperate to win but neither can stop…..

Wow! Just wow. I can’t remember the last time I read a novel where the main characters hated each other so much, yet had such a powerful chemistry. I mean, Chloe and Bennett hated each other. Hated! Yet they couldn’t seem to keep their hands off each other and in turn took every opportunity to indulge in some extracurricular office activity. Activity that resulted in various office hook-ups where almost constant destruction of clothing occurred and both were left wanting more.

Christina Lauren pretty much jumps straight into the physical relationship between Chloe and Bennett, and while I loved the chemistry and fierce attraction that simmers between them I felt their relationship moved fast in the very beginning. I kept having to remind myself that technically they had already known each other for almost a year when Beautiful Bastard began. Personally I like seeing characters get to know each other on a deeper level before jumping into the sack—but that’s just me.

Featuring two strong main characters and told through both their POV’s Beautiful Bastard is a scorching, sexy and downright delectable novel and I look forward to reading the rest of the series!

Source: I purchased from The Book Depository
Format: Paperback
Buy it: The Nile | The Book Depository | Amazon
My Recommendation: For those NA fans who love intense sex and passion
Cover: Love the black, red and white sexy cover.
Will I read sequel/continue with series: Yes.