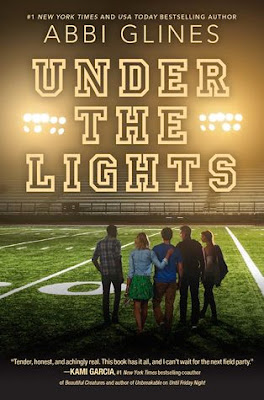 Under the Lights by Abbi Glines
Releases on: August 23rd 2016
Add on Goodreads!
In the follow-up to Abbi Glines’s #1 New York Times bestseller Until Friday Night—which bestselling author Kami Garcia called “tender, honest, and achingly real”—three teens from a small southern town are stuck in a dramatic love triangle.

Willa can’t erase the bad decisions of her past that led her down the path she’s on now. But she can fight for forgiveness from her family. And she can protect herself by refusing to let anyone else get close to her.

High school quarterback and town golden boy Brady used to be the best of friends with Willa—she even had a crush on him when they were kids. But that’s all changed now: her life choices have made her a different person from the girl he used to know.

Gunner used to be friends with Willa and Brady, too. He too is larger than life and a high school football star—not to mention that his family basically owns the town of Lawton. He loves his life, and doesn’t care about anyone except himself. But Willa is the exception—and he understands the girl she’s become in a way no one else can.

As secrets come to light and hearts are broken, these former childhood friends must face the truth about growing up and falling in love…even if it means losing each other forever.
Thoughts:
You can guarantee that if Abbi Glines releases a book I'm going to be dying to read it, but there was a freshness to Until Friday Night that I really loved last year and I can't wait to read this sequel. Under the Lights sounds amazing and I can't wait to devour it upon it's release!