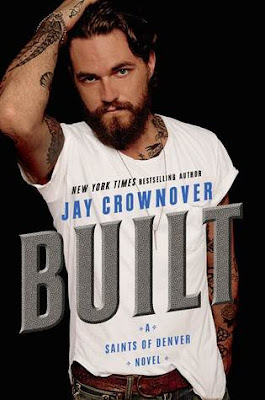 Built by Jay Crownover
Releases on: January 5th 2016
Add on Goodreads!
From the New York Times and USA Today bestselling author of the Marked Men books comes an electrifying new spin-off series,Saints of Denver, featuring all the characters fans have been dying to read about.

Sayer Cole and Zeb Fuller couldn’t be more different. She’s country club and fine-dining, he’s cell-block and sawdust. Sayer spends her days in litigation, while Zeb spends his working with his hands. She’s French silk, he’s all denim and flannel.

Zeb’s wanted the stunning blonde since the moment he laid eyes on her. It doesn't matter how many smooth moves he makes, the reserved lawyer seems determinedly oblivious to his interest—either that or she doesn't return it. Sayer is certain the rough, hard, hot-as-hell Zeb could never want someone as closed off and restrained as she is, which is a shame because something tells her he might be the guy to finally melt her icy exterior.

But just as things start to heat up, Zeb is blindsided by a life altering moment from his past. He needs Sayer’s professional help to right a wrong and to save more than himself. He can’t risk what’s at stake just because his attraction to Sayer feels all consuming. But as these opposites dig in for the fight of their lives, battling together to save a family, the steam created when fire and ice collide can no longer be ignored.
Thoughts:
Having recently read, finished and loved Jay Crownover's Marked Men series I'm soooooo excited for the spin-off series, Saints of Denver and I cannot wait to read Sayer and Zeb's story Built. I'm super excited to see these two fall in love. Eeep!
What do you think of Built? Have you read Jay Crownover's books before?
And what are YOU waiting on this week?