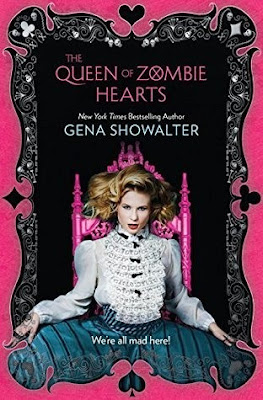 I thought I had nothing left to give. I thought wrong. They started the war. Now I will end it.

In the stunning conclusion to the wildly popular White Rabbit Chronicles, Alice "Ali" Bell thinks the worst is behind her... until Anima Industries, the agency controlling the zombies, launches a zneak attack, killing four of her friends. It's then she realises only the worst has only begun.

As the surviving slayers prepare for war, Ali discovers she, too, can control the zombies... and she isn't the girl she thought she was. She's connected to the woman responsible for killing — and turning — her boyfriend's mother. How can their relationship endure? As secrets come to light, and more slayers are taken or killed, Ali will fight harder than ever to bring down Anima — even sacrificing her own life for those she loves.

The Queen of Zombie Hearts is the third novel in Gena Showalter’s sensational White Rabbit Chronicles and is the final book in the series told strictly in Ali POV, seeing our strong and daring heroine take on Anima’s forces in one final battle.

Alice “Ali” Bell has been to hell and back in recent times. Now a seasoned slayer, she’s been kidnapped, tortured by Anima Industries and possessed by her zombie alter-ego. So when Anima launch an unexpected attack on the slayers, taking the lives of some of the people Ali cares about, Ali’s decides it’s time to stop Anima once and for all. Even if it means trusting someone Cole is sure she shouldn’t trust, and putting her faith in a new rag-tag group of slayers who have just as much to lose as Ali’s gang…..

So…..Gena Showalter is a legend. A pure writing legend. And I’m oh so much of a fangirl where she’s concerned. I’ve read more books of hers than I can name and I’ve loved every one of them, with The Queen of Zombie Hearts absolutely no exception!

Gena Showalter has created a riveting world within the White Rabbit Chronicles. Her clever twist on zombies and her ability to base the series loosely around Alice in Wonderland has been wonderful from the get go! Her writing is flawless; managing to be sharp, witty and entertaining and her ability to create characters with fantastic dynamics and chemistry is something I really love. The dialogue in this series is perfect and Showalter writes some wonderfully detailed fight sequences throughout the novel also.

I’ve really enjoyed following Ali throughout this series and have always found her to be a strong, resilient young woman. She has fire inside and out and I love that she isn’t afraid to take risks, make hard choices and yet still manages to be a normal teenage girl at the end of the day who loves her friends, family and her boyfriend.

All the characters have had such life in this series and I’ve fallen in love with all the slayers in Ali’s life. Obviously Ali and Cole are stand outs, but I love Kat and Frosty, Reeve and Bronx, Gavin, Mackenzie, Jaclyn, Mr Ankh and even Ali’s Nanna. Oh, and Gena Showalter’s decision to branch out and introduce us to a new faction to zombie slayers has only added to my list as River, Chance and Camilla have left me intrigued and eager to get to know them more!

The Queen of Zombie Hearts is a great conclusion to Ali’s journey in this series, but is not without its loss and sadness. Showalter doesn’t shy away from taking the lives of certain characters, although there is rhyme and reason behind these decisions; some of which open even more doors of possibilities for the characters effected.

Fast paced, exciting and endlessly addictive The Queen of Zombie Hearts is without a doubt a must read and leaves me ready to dive into the fourth book, A Mad Zombie Party, told through the eyes of slayers Frosty and Camilla as they unexpectedly find that their path to redemption lies in the other……

Source: I purchased from Big W
Format: Paperback
Buy it: Bookworld | The Nile | The Book Depository | Amazon
My Recommendation: This series is BRILLIANT and perfect for those who love zombies, hunting and romance
Cover: Very pretty and perfect with the others in the series.
Will I read sequel/continue with series: Yes! I'm going to jump straight into the next one!