Book Shelf: In Dawn and Darkness (Secrets of Itlantis #5) by Kate Avery Ellison 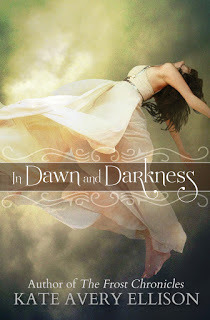 The final installment in the Secrets of Itlantis series!

Aemi and her team of unlikely allies must find the mythic and long-lost final city before war with Nautilus destroys the rest of Itlantis. As enemies close in, who can she trust?

In Dawn and Darkness is the fifth and final book in Kate Avery Ellison’s impressive Secrets of Ilantis series and sees a fantastic series go out in spectacular manner; mixing politics, romance and danger together one final time in a conclusion that is full of emotion!

Secrets of Itlantis has been a really enjoyable series to witness unfold. Kate Avery Ellison has released instalment after instalment that has been action packed, forward moving and exciting. There’s romance, friendship and plenty of twists and turns to keep you entertained; something that translates all the way to the final book, In Dawn and Darkness.

Aemi Greywater has been through so much since discovering a whole new world beneath the sea. She’s learnt the truth about her heritage, discovered a family she never knew existed and found herself in the middle of a battle between the Ilantean people and the Dron before finding herself in the midst of a war closer to home where the lines between friends and enemies have never been more blurred. Aemi has found love, found friends and lost so much, but in this last instalment of an amazing series, everything is on the line and nothing will ever be the same…..

I’m really sad to see this series come to an end, but I’m so pleased to have read it. The different worlds, different races and different people Kate Avery Ellison has created have gone together really well and made for a really interesting read. I’ve loved seeing Aemi grow and discover who she is and what she wants from life. She’s become such a strong person and I’ve adored seeing her fall in love with Nol. They’re a great pair and I’m glad they’ve made it together.

The characters within In Dawn and Darkness, and really the whole series, have been excellent. This final book is not without its losses, but Ellison manages to give us a lot of happiness too. The supporting characters have always complimented the series wonderfully and I’d never pass up the chance to visit them again. A spin off featuring Valus or even the Dron is something I’d be interested in…..

If I’m being honest, I was the tiniest bit underwhelmed by the very final few chapters of this book. In Dawn and Darkness managed to be exciting and riveting with plenty of things happening, but the final few chapters I felt concluded too easily. There has been such a build up to the battle Aemi and her allies have against Nautilus throughout the series that I felt the resolution seemed too easy; I wanted to see a bit more fight between those fighting for their home, freedom and very lives. Yet in saying that, I am pleased with how the series ends and I’m very sad to say goodbye to the characters.

Fast paced, exciting and filled with romance, Secrets of Itlantis ends well with In Dawn and Darkness and if you haven’t already read the series, I would definitely recommend checking it out!

Source: Sent for review by the author (Thank you Kate!)
Format: Kindle ebook
Buy it: Amazon | Barnes & Noble
My Recommendation: For fans of fantasy
Cover: Fits in perfectly with the others in the series!
Will I read sequel/continue with series: This is the last book in this series, but I'll definitely read more by Kate Avery Ellison in the future......