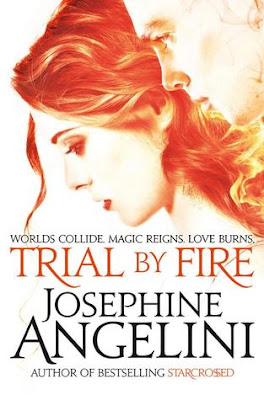 This world is trying to kill Lily Proctor. Her life-threatening allergies keep her from enjoying many of the experiences that other teenagers take for granted...which is why she is determined to enjoy her first (and perhaps only) high-school party. But Lily's life never goes according to plan, and after a humiliating incident in front of half her graduating class Lily wishes she could just disappear.

Suddenly Lily is in a different Salem - one overrun with horrifying creatures and ruled by powerful women called Crucibles. Strongest and cruellest of all the Crucibles is Lillian . . . Lily's identical other self in this alternate universe. This new version of her world is terrifyingly sensual, and Lily is soon overwhelmed by new experiences.

Lily realizes that what makes her weak at home is exactly what makes her extraordinary in New Salem. It also puts her life in danger. Thrown into a world she doesn't understand, Lily is torn between responsibilities she can't hope to shoulder alone, and a love she never expected.

But how can Lily be the saviour of this world when she is literally her own worst enemy?

Trial by Fire kicks off Josephine Angelini’s new series and introduces readers to a new intriguing world that mixes magic and danger together with romance and adventure in a tale that really takes being your own worst enemy to a new level!

Lily Proctor is allergic to the world. Having spent her whole life in and out of hospitals, experiencing seizures and illnesses none of the best doctors can identify, Lily is tired of being an outcast. Yet, when an attempt at being a normal teenager sees Lily heartbroken and seeking any kind of escape, the last think she expects is to be transported to a whole new world; a world featuring different versions of almost everyone Lily knows, a world very different than Lily’s own. Discovering quickly that magic exists and there’s a reason she is the way she is, Lily soon finds herself face to face with her own alter-ego, a very powerful and cruel woman who has her own agendas and isn’t above using Lily for her own gain…..

I’m not quite sure what I expected heading into Trial by Fire, but whatever it was it certainly wasn’t what I ultimately found….and yet I really enjoyed the story Josephine Angelini has created. I admit in the first couple of chapters I found the novel slow, but once I found my footing I discovered I very much enjoyed reading Lily’s tale.

Told in the third person, Trial by Fire primarily follows Lily, but that doesn’t stop Angelini from throwing in a chapter here and there not told through the eyes of our main character. This allows for a more rounded story as there are certain moments that Lily isn’t present for that are detrimental to the evolving storyline. I felt like Angelini’s world building was very well expressed and I like the way she has built this alternate world Lily finds herself in. As we quickly learn, it’s a blend of old and new with simple ways of living mixing with modern technology and magic.

Josephine Angelini’s writing is solid and details a vivid world, inhabited with many interesting individuals. At first I questioned whether I could some to adore Lily, but as the novel progressed she really wore on me. I think she’s one of those characters with real potential and I can see Angelini developing her a lot as the series progresses. At her heart, I think Lily is a kind, strong character and I look forward to seeing her grow.

Trial of Fire wouldn’t be complete if there wasn’t a love interest and a hint of romance to support its action, magic and adventure, something Angelini includes in the form of Rowan Fall. Now, I have no intentions of giving too much away, but there’s a complexity to Rowan and Lily’s relationship that makes for some unique conflict. The attraction is there, and Angelini builds on this with some sweet, tender moments as the two get to know each other during some complicated situations. Personally I loved the relationship between Lily and Roman and found myself hanging out for their next tension filled interaction. What can I say—I love those love-hate relationships, even if this one was more one sided and love seeing them change into something really powerful and fiery.

Overall I was very impressed with Trial by Fire. Perfect for fans of Maria V. Snyder and Sarah J. Mass, the vividly described world within the story has won me over, as have the cast of characters and all the possibilities for this series. I very much look forward to reading more!

Source: Purchased by me from The Book Depository
Format: Paperback
Buy it: Bookworld | The Nile | The Book Depository | Amazon
My Recommendation: Perfect for fans of Maria V. Snyder and Sarah J. Mass and lovers of fantasy.
Cover: I think this cover is really pretty.
Will I read sequel/continue with series: Yes.