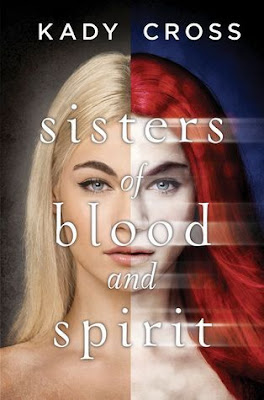 Wren Noble is dead—she was born that way. Vibrant, unlike other dead things, she craves those rare moments when her twin sister allows her to step inside her body and experience the world of the living.

Lark Noble is alive but often feels she belongs in the muted Shadow Lands—the realm of the dead. Known as the crazy girl who talks to her dead sister, she doesn’t exactly fit in with the living, though a recent suicide attempt and time in a psych ward have proved to her she’s not ready to join her sister in the afterlife.

Now the guy who saved Lark’s life needs her to repay the favor. He and his friends have been marked for death by the malevolent spirit of a vicious and long-dead serial killer, and the twins—who should know better than to mess with the dead—may be their only hope of staying alive.

Sisters of Blood and Spirit is the first book in best-selling author Kady Cross’s new YA series and introduces her readers to a promising paranormal and ghostly new world.

Twin sisters Lark and Wren Noble couldn’t be more different. For starters one is blond, the other a redhead and both have very different personalities. Oh, and Lark is alive, whereas Wren….isn’t. Stillborn at birth, Wren has spent her entire life by her sister’s side, the only person who is able to see and interact with her as though she is a living, breathing human being. As a ghost, Wren is able to travel between the living world and the Shadow Lands, a place where ghosts dwell and exist. Lark has had a difficult life, made more so by the rumours that seem to follow her, branding her as crazy and insane for talking to her “imaginary” sister, but Lark wouldn’t give her sister up for the world. When Lark is approached by a group of teens from her school who have found themselves haunted by the spirit of a long dead serial killer, Wren and Lark must set out to stop the ghost from tormenting and torturing the kids further or risk someone ending up dead……

As someone who adores Cross’s Steampunk Chronicles, Sisters of Blood and Spirit was a novel I knew I had to read the moment I heard about its existence. While I wasn’t blown off my feet, I found Sisters of Blood and Spirit to be a promising and solid read. Cross features two very different sisters, with the novel detailed through their varying POV’s.

Solidly written, Sisters of Blood and Spirit sets up a promising ghostly series and features an overall aura that will appeal to fans of Rachel Vincent’s Soul Screamers series as well as anyone who loves a good ghost busting mystery.

Overall I did like both Wren and Lark. Lark was very guarded and self-protecting, but considering the reactions people had towards her, that really was understandable. Wren on the other side was a little softer, but also has a very dark side to her, courtesy of her ghostly nature. Both sisters are very different, but the thing that stood out most for me was the strong relationship between them. They would clearly do anything for each other and I loved how Cross managed to convey this within the story!

Sisters of Blood and Spirit is a bit of a ghost mystery and ghost busting type read, with Lark unafraid to take ghosts head on and delve into the hauntings happening to her classmates. Though she is reluctant to help in the beginning, Lark quickly becomes determined to bring the responsible ghost to justice; even if it means going ghostbuster on his ass!

The teenagers Lark and Wren help; Mason, Roxi, Ben, Kevin, Sarah and all proved to be potential friends to Lark and Wren with romances between Lark and Ben and Wren and Kevin beginning. Personally I kinda found the romance between Lark and Ben was unnecessary and I didn’t really feel the connection between. Not when there was Mace. Though he is with Sarah, I felt like he and Lark had a real connection and I liked the dynamic between them. Though Lark is interested in Ben, and he her, I’m interested to see what Cross does with Lark and Mace as I feel they have real possibility.

Wren’s relationship with Kevin on the other hand has me scratching my head a bit. Though she is a ghost, Kevin being a medium makes him one of the only people besides Lark who can hear, and occasionally see Wren. They seemed really sweet and I thought they both cared for one another, but something Kevin does at the end of the book has left me feeling disheartened with them. Obviously they have more than their shares of obstacles in their way but surely Kevin didn’t have to do what he did….

Sisters of Blood and Spirit appears to be a great new series and if the first novel is anything to go by Kady Cross has big plans in store for Lark and Wren and I for once can’t wait to find out what they are!

Source: Purchased by me from Big W
Format: Paperback
Buy it: Bookworld | The Nile | The Book Depository | Amazon
My Recommendation: If you like ghostly tales you will enjoy this
Cover: This cover is stunning!
Will I read sequel/continue with series: Yes. I would like to read more.