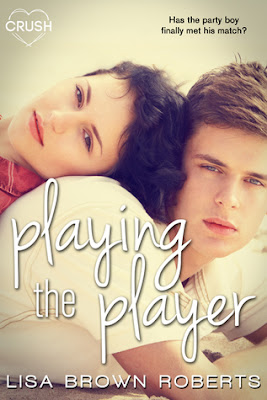 The Good Girl Vs. The Player
Round one begins...


Trina Clemons needed the money. Why else would she - the most organized, prepared student in school - spend the summer as a nanny and partner with the biggest slacker ever? Now she's ready to tackle nannyhood with her big binder of research and schedules. Just don't ask her about the secret job of "fixing" the bad habits of a certain high school player...

Slade Edmunds prefers easy hook-ups, and Trina is definitely not his type. She's all structure and rules, while Slade wants to just have fun. Fortunately, Trina has no idea about the bet Slade made with his best friend that he can totally get her to unwind by the end of summer...

Then the weirdest thing happens. There's chemistry. A lot of it.
But nothing gets between a boy and a girl like a big, fat secret...

Playing the Player by Lisa Brown Roberts is a fun, sweet and entertaining romance that is the perfect way to kill an afternoon with it's enjoyable storyline, endearing characters and fantastic chemistry.

Trina Clemons is ready for a summer of baby sitting. She's organized, prepared and has a plan for whatever may come her way. Or she did.....until she's asked to partner with one of the biggest playboys and slackers her high school has to offer. The money's good, but secretly mentoring someone who never takes anything seriously and seems like a lost cause isn't something Trina is prepared for at all; no matter what schedules, contingencies and plans she has filed away in her trusty binder of tricks.

For Slade Edmunds letting people assume has often been easier than proving them wrong. So what if he prefers easy hook-ups and letting people think they know him? He's only looking for fun and isn't hurting anyone. Taking on a job as a nanny for some cute little kids may be just the way to prove to his parents he's not the airhead they think he is, but Slade certainly isn't expecting his uptight partner to be more intriguing than anything he's ever experienced. And when Trina and Slade suddenly find the sparks flying between them, both soon realize that sometimes people really aren't what you expect and love isn't something you can prepare for......

Heading to Playing the Player I was looking for a fun, easy read and while that's definitely what I found, I also wasn't expecting to love it as much as I did. Playing the Player really does hook you straight away and I found myself flying through the nove. The talented, and wholesome way Lisa Brown Roberts develops the story is perfect and made it easy to devour in one sitting.

Both Trina and Slade were fabulous characters and Lisa Brown Roberts develops their relationship in a sensational manner. There's chemistry, fire and flair between them, and as these two opposites attract, it was wonderful seeing how well they complimented, supported and helped better the other. Lisa Brown Roberts pens some fabulous dialogue and banter between Trina and Slade and supports them with a great cast of characters, from their parents, their respective best friends Leah and Alex, and the two little cuties they babysit, Gillian and Max!

Honestly, there isn't anything about this story I can fault. Brown Roberts builds Trina and Slade's romance on a great base of developed friendship that simmers with sweet attraction. Props go to her for making me really care about her characters and also having the chance to see them build to something over time, rather than jump straight in. Oh, and I loved the friendship and absolute acceptance between Slade and his best friend Alex, who is as gay as they come. Slade accepted Alex completely and never questioned who he was once---you don't see enough of their kinds of best friends as far as I'm concerned. in YA literature.

Well told, with great characters and a wonderful romance, Playing the Player is a great easy read by Lisa Brown Roberts that left me satisfied and happy for the characters and their endearing relationship. Definitely recommend if you're looking for something light, fun and oh, so good!

Source: Sent for review thanks to YA Bound Book Tours and Entangled Publishing (Thanks guys!)
Format: Kindle via Netgalley
Buy it: Amazon | Barnes & Noble | Kobo | iBooks
My Recommendation: This is really fun YA and I recommend if you want something sweet, but full of romance
Cover: It does seem simple, but it feels fresh
Will I read sequel/continue with series: This is a stand alone novel, but I'd definitely read more by Lisa Brown Roberts or revisit the characters if I ever had the chance.