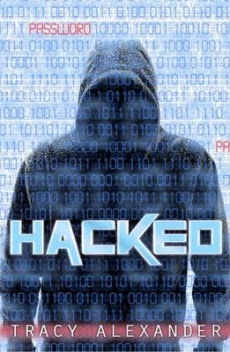 Dan had been diagnosed as ADHD as a child. He quite liked the ritalin, but then he got into computers, and for his parents a geek was better than something feral. It was hard to remember when the genuine hacking started; but free phone credit was the first illicit, tangible "real-life" results of a hack, though not the last.

By the time Dan is contacted online by "Angel," he is eager for the challenge laid before him - creating tricky bits of code. But Dan begins to suspect that something more nefarious may be planned for his code than he thought. He will have to decide what truly matters more - protecting his anonymity and freedom or preventing a deadly terror attack ...

Hacked is Tracy Alexander’s debut novel and is an interesting novel that explores the line between cyber-geek and cyber-terrorist and what happens when one boy crosses the line, with almost tragic results.

Sixteen year old British teenager Dan Langley is known to his friends and school mates for his hacking skills. Somewhat of a recluse, Dan is a cyber-geek with skills; able to hack into almost anything, a talent and passion that has helped him out, but also earned him a bit of a reputation. Yet for Dan, he finds himself crossing the line from cyber-geek and cyber-terrorist when a challenge by online peer and fellow "hacker" Angel sees Dan hack into a US drone, only to give the codes required for access to Angel, who takes over and hijacks the dangerous weapon. Plagued by his part in this seeming act of terrorism, Dan has no choice but to go to the authorities, telling them of his involvement and all he knows, an act that will see him thrust into the spotlight and facing the harsh consequences of his actions.

For me, Hacker was a decent read that started out slow, but steadily progressed. Even as a female author, Tracy Alexander manages to convey an authentic sounding male voice and a distinct male way of thinking in Dan; something not all authors manage to get right. The writing was solid, although I’d be lying if I didn’t admit that some of the technical terms and descriptions were lost on me, but Alexander wrote in such a way that I still understood the gist of what Dan was referring to.

At its base the storyline was simple; teenage hacker hacks drone, gives codes over to unknown online friend who then takes control of the drone, making threats to the London population while Dan has to deal with the fallout of his involvement; something that included the media coverage, criminal case and possible prosecution or extradition. And yet I liked how Alexander explored how easily doing something as simple as editing some online code and hacking can escalate; especially when someone isn’t aware of the risk they take or are being taken advantage of without their knowledge.

Overall I liked Dan. He was easy enough to follow, and I liked his running internal monologue. He didn’t blow me away as a character, but I felt he grew throughout the story and certainly learnt his lesson where hacking is concerned. Alexander writes a decent male lead and I enjoyed the authentic interactions Dan had with his family and friends.

Despite it’s slow start, Hacked turned out to be an enjoyable read that kept me on the edge of my seat towards the end as we fought to determine what Dan’s future would be. With Hacked concluding nicely, I’ve discovered that Tracey Alexander has written a companion novel, Alias, detailing Angel’s story and considering Angel’s role within Hacked, I’m intrigued to see what Alexander has planned there!

Source: Sent for review by Scholastic (Thanks guys!)
Format: Paperback
Buy it: Bookworld | The Nile | The Book Depository | Amazon
My Recommendation: I think this book is something male readers will really get behind.
Cover: I do dig the cover--it's pretty cool!
Will I read sequel/continue with series: I am intrigued to read the companion novel Alias, and may check it out........