Book Shelf: I Made Lattes for a Love God by Wendy Harmer 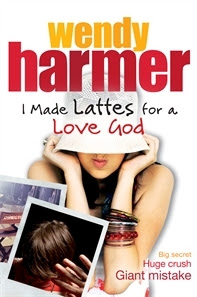 Elly Pickering has a juicy secret. A secret her PR mum won't let her tell anyone because if the kids at Oldcastle High knew that mega-star Jake Blake (yes, THE Jake Blake, teen sensation and all round heart-throb) was coming to Oldcastle to film his latest movie, they might just explode with excitement.

Elly is determined to get on set and to get more than a glimpse of her Hollywood crush. But now thanks to an unfortunate incident involving a car, a red handbag and the paparazzi, it looks like Elly's lost a lot more than her opportunity to be close to Hollywood royalty. She's lost her dignity, her job and her best friend. How will she ever be able to get everything back to normal?

I Made Lattes for a Love God by Wendy Harmer is a novel that in my opinion is best suited to the younger teenage girl who enjoys gossip, friendship and a whole lot of drama.

I Made Lattes for a Love God sees readers meet Eleanor "Elly" Pickering, a fifteen year old girl who discovers herself in the centre of a media frenzy when her mother lands a job looking after the promotional aspect of a Hollywood movie starring a popular "it" boy and they decide to shoot the film at Elly’s high school. Throw in a bunch of secrets and some paparazzi mayhem and Elly soon finds herself in the deep end without a paddle…..

Wendy Harmer is a well-known Australian comedian. I feel like I’ve grown up seeing her face on tv or hearing her voice on radio, so the chance to read a story by a home-grown talent was really exciting. But in all honesty, I Made Lattes for a Love God probably wasn’t the book for me. I persevered because I can be a stubborn thing and I felt as a review novel I had to finish it, but I didn’t enjoy the story all too much. Was I Made Lattes for a Love God a bad book? Not necessarily, no. It just wasn’t for me. If I’d read it maybe eight or so years ago I may have appreciated it a bit more, but for me at this point in my life, I really struggled.

Heading into I Made Lattes for a Love God I had no idea there was a previous novel called I Lost My Mobile At the Mall featuring Elly. When I realised about three chapters in, I was concerned, but found this didn’t really effect my ability to read and understand what was going on. If anything, I Made Lattes for a Love God is more a companion novel than a strict sequel.

Personally I found the main character Elly to be incredibly difficult to like. I’m not trying to toot my own horn or anything, but I was always mature for my age and as such can’t imagine acting the way Elly acts in this novel. She was immature and childish, and although there was growth in her, it wasn’t enough to redeem her in my eyes.

When a main character is difficult to like, it can really effect the rest of the novel and this was the case for me and I Made Lattes for a Love God. After a new chapters I found myself growing tired of Elly’s friendship and relationship dramas. Everything felt overly dramatic and unnecessary. From interactions with her sister to her reactions to her best friend’s involvement in the movie---I really struggled. Elly seemed vapid and childish and just not someone I enjoyed following.

For me the saving characters were Rosie and Tyler, both of whom I liked but felt we didn’t see enough of. Overall I Made Lattes for a Love God was just a hard book for me to get through and not something I would be quick to recommend.

Source: Sent for review by Allen & Unwin (Thanks guys!)
Format: Paperback
Buy it: Bookworld | The Nile | The Book Depository | Amazon
My Recommendation: This isn't something I highly recommend, but if your on the younger end of the YA reader, you may enjoy this.
Cover: The cover is actually much nicer in person.
Will I read sequel/continue with series: No. I won't be interested in reading any more of Elly's tales.......