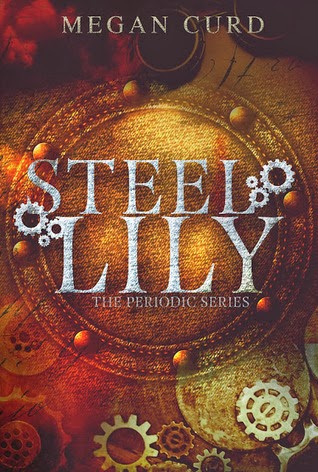 She’s a water Elementalist, the strongest of her dwindling kind. She creates steam to provide energy to fuel Dome Four: the only thing standing between humanity and an earth ravaged by World War III. No steam, no Dome. No Dome, no life.

Or so she thinks.

That is, until a mysterious man offers her a way out of having to donate steam. A way to escape the corrupt government of Dome Four. While the offer seems too good to be true, Avery is intrigued. But when she arrives to her new home, she realizes the grass isn’t any less dead on this side of the fence. Instead, the lies are just hidden better.

When Avery enlists the help of her friends to uncover the truth, she learns that while some secrets are better left concealed, humankind was never meant to live in a cage. And when you can control the most sought after resource, you can learn to control anything…including the fate of your world.

Steel Lily is Megan Curd’s foray into the steampunk genre and is a masterfully told and perfectly woven tale of danger, excitement and dashing adventure. With its exhilarating storyline and tangible characters, Steel Lily will easily entertain from beginning to end!

Alright, I have to be honest; I wasn’t really sure what to expect when I began this book. Although the cover is pretty it's also very unassuming and doesn't speak a lot to the book it houses. I’ve read very few steampunk novels and although I quite enjoyed the ones I have read I still wasn’t sure what Steel Lily would be like. And in saying that, let me just say how truely much I loved this book! Steel Lily turned out to be an unexpected gem for me!

Even though she is an already self-published author, this was my first novel by Megan Curd, but I was highly impressed. I don’t know what her previous work is like, but I very much liked what she has done with the first book in her new The Periodic Series. The world was rich and lush and full of vivid characters and excitement. Plenty of twists kept me on my toes and the way Curd weaves together her storyline was excellent. Plus, the character dynamic that develops between our main character and the individuals she meets made for some witty and smart dialogue.

Introducing us to a society forever altered by World War 3 and radiation exposure, Steel Lily follows the adventures of Avery Pike, a fifteen year old girl and Elemental who lives in Dome Four. In a world where certain individuals have the ability to control different elements and the atmosphere outside is supposedly uninhabitable, the people of Dome Four reply on Avery, and those like her, to supply it with the steam it needs to keep operating sufficiently. With the appearance of a surprising and at time dubious stranger, Avery finds herself leaving Dome Four; quickly embarking on a crazy journey that sees her discover truths about the world around her she never expected.

A strapping and stubborn young lass, Avery has lived her entire life in Dome Four and after being left orphaned after the disappearance of her parents only had her best friend Alice and their friend Leg’s as family. I truly, truly liked Avery. This girl has fire, and I don’t just mean her fiery locks. Avery Pike is smart and spirited and extremely easy to follow. Impossible not to like, Avery’s voice is quick and fast thinking and also very vulnerable. She’s just a generally good character to follow and I certainly liked seeing her take chances and do what she had to do.

Throughout Steel Lily, Avery is joined by her shy, but also strong-willed best friend Alice on her adventure as well as their friend Legs, but soon meets a vast array of characters, including the tech quiz Sari, the clever, whimsical and cheeky Jaxon "Jax" Pierce and dark and mysterious Mr. Riggs, who are all more than they appear.

I liked all the characters in this book. Alice, and then Sari, were true friends to Avery, and Riggs certainly proved to be unexpected at times, but the individual who stole the show for me was Jax. Megan Curd gave him such character, and real personality. Jax was brash and forward and extremely cheeky and I adored the one liners and tongue in cheek comments he seemed to have by the truckload. Curd made him someone you constantly wanted to read about because of the life he brought to the story.

The chemistry that develops between Avery and Jax is sizzling from the beginning and is a slow simmer that slowly burns as the story progresses. These two go toe to toe at times and the tension only gets better as the attraction and connection develops. It seems obvious that there is going to be something between these two from the moment Jax is introduced to the story, but that doesn’t make it any less satisfying to watch unfold.

Perfect for fans of The Girl in The Steel Corset by Kady Cross, Steel Lily features a great cast of characters and an intriguing storyline that sees friends become foes and allies turn into enemies in this riveting steampunk novel that will easily leave you wanting more!

Source: Sent for review by the author (Thank you Megan!)
Format: Kindle ebook
Buy it: Amazon (Kindle) | Amazon(Paperback) | Barnes & Noble | Kobo
My Recommendation: Kady Cross and steampunk fans will want to add this to their TBR list pronto!
Cover: It's simple, but I really like it. Now having read the book it's so very fitting for the story.
Will I read sequel/continue with series: YES! Without a doubt!