I'm ecstatic to be taking part in the Book Blitz today for Resistance by Jena Leigh, book two in the Variant Series thanks to Xpresso Book Tours! I'm super excited to be taking part in this blitz as I adore this series, having read both books and even more excited to share this guest post by Jena Leigh that sees her talk about her characters--characters that I ADORE I might add!

There's also a tour wide giveaway going on AND I've got an ebook to give away--either book one or two in the Variant Series. Winners choice!

Creating Characters for the Variant Series

When I sat down to write the story of Alexandra Parker and her strange, Variant-filled world, I realized fairly quickly that the novel would be just as much about Alex, as it would be about her newfound friends.

At first, Revival (the first novel in the series) had no plot. Not even a rough outline. There was no destination for the story and there were no real characters to speak of. All I knew about the book that Revival would eventually become was a single moment, pulled from a scene that takes place a few chapters into the tale—an image of a young girl running through a burning bookstore, a wall of flames licking at her back as she fled down the aisle with no way out.

I didn’t know who Alex was, back then… but I knew a lot about the guy she’d find waiting for her at the top of that black spiral staircase in the far corner of the store.

Declan O’Connell—the blonde-haired, blue-eyed jumper who was equal parts bad boy and smartass—was a character I’d been forming in my mind for a long, long time, but had yet to find a home for. Going into the project, Declan was the only character that I knew inside and out. Or at least, the only one I thought I knew.

As the story progressed, Declan’s character grew and matured in my mind, pieces of his backstory falling into place and revealing the source of his bad attitude and surly disposition. By the time I wrote the last page of Revival, I understood Declan in a way I never could have imagined during those opening chapters.

The truth is, I don’t create my characters so much as discover them as I work their stories onto the page.

All of the characters in the Variant series came to me in varying forms of completeness. A name here, a face there, a quirk or two to distinguish them, an important bit of backstory that forever changed their life or altered their personality… And often, I didn’t know what a characters would do or say in a situation until I’d put them in that situation and let the character speak for herself.

In the case of Declan’s younger sister Kenzie, I had a crystal clear image of her physical appearance before I even decided on her name. In fact, her name was chosen because it was the only name I could think of that fit the picture in my head.

Well, I think it’s fair to say that I was not expecting the girl who eventually showed up on the page. Kenzie was a pleasant surprise, but a surprise nonetheless. My early thoughts about the girl she might turn out to be ended up completely different from the caffeine-addicted teen that eventually worked her way into the story.

For me, that journey of discovery—of learning to understand my characters better as the
story progresses—is one of my favorite things about writing. By allowing the characters to develop naturally, I’m just as surprised as the reader is by who and what they eventually turn out to be. It’s an enjoyable process and something I honestly can’t get enough of. The further into the Variant series I get, the better I get to know these characters—and the more I grow to love them.

Jena Leigh is the author of the Variant Series novels REVIVAL and RESISTANCE. Born and raised in Tampa, Florida, she spent ten years in the mountains of North Carolina before returning home to the lightning capital of North America. A shameless geek, she loves coffee, loud music, bad sci-fi movies, Skittles, and shenanigan-filled road trips to faraway concerts. 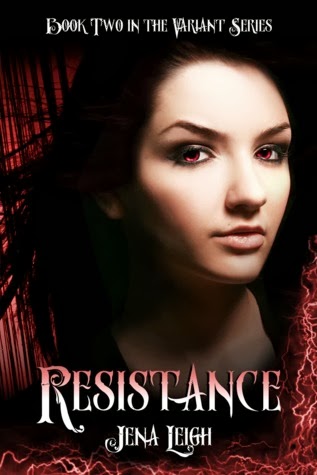 Alexandra Parker might be the most powerful Variant the world has ever seen—but even that won’t get her out of finishing her junior year of high school.

The challenge of keeping her abilities under wraps during class is daunting enough, but throw one surly, sandy-haired Jumper into the mix, and things can get downright complicated.

Declan’s new job? Watch over Alex while she’s at school and do everything in his power to keep her from losing control. But as sparks of every kind begin flying between Alex and her new bodyguard, she's left feeling more unstable than ever.

When avoiding her abilities results in a surprise visit from her parents’ killer, Alex’s worlds collide with a bang that nearly levels Bay View High.

With her freedom now squarely in the Agency’s crosshairs, Alex will be faced with the fight of her life... and a decision that could forever alter the course of her destiny.

Be sure to check out my review of the first book in the series or add it on Goodreads here!

Below you'll find the tour wide giveaway which I urge you all to enter, but first I have an ccopy of either Revival (Book 1) or Resistance (Book 2) to give away! This is the perfect opportunity to start this fantastic series OR get your copy of Resistance if you've already read the first :)

To enter simply comment with your email address, which book you want (1 or 2) and your preferred format! Giveaway ends on March 8th. Good-luck!
a Rafflecopter giveaway
I'm not kidding when I say this series is epic. Fans of The Mortal Instruments and series where the character dynamic shines amongst a brilliant storyline will LOVE this too! Be sure to add this to your TBR list guys--you won't be sorry!