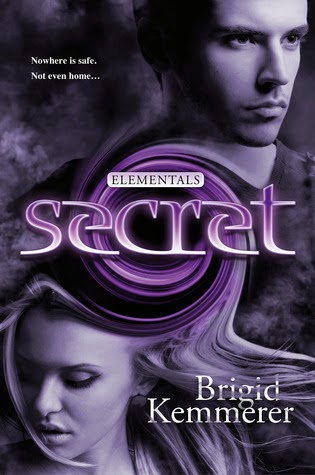 And then Quinn takes to hanging around his sworn enemy, and an Elemental Guide is counting the hours until he can try again to kill the Merrick brothers. Storms are brewing. On all sides.

SECRETS IN THE WIND. DANGER IN THE AIR.

Brigid Kemmerer continues her riveting Elementals series with Secret, the emotionally driven and shockingly exciting fourth instalment that explores Merrick brother Nick like never before and finally allows readers into some unexpected secrets!

In all honesty, the last book in this series wasn't my favourite. Don't get me wrong, Spirit was a wonderful read, but it seemed to be missing that extra something the first two books had in my opinion. In saying that, I was nervous heading into Secret. Though I've mostly liked her, Quinn has had her moments where I've struggled to connect with her and as the quiet, calm and disconcerning brother, Nick has sometimes faded into the background. I was worried Secret wouldn't live up to the first two books....but boy was I wrong! I think Secret is quite possibly my favourite book yet!

Prior to reading Secret, I had the chance to read Breathless, an Elemental novella which features both Nick and Quinn but is set before the events of Secret thanks to the Australian edition of Secret that included it as a bonus feature. At around 50 pages long, Breathless allows readers to learn Nick's secret for this first time, something I appreciated, as in all honesty I hadn't quite put two and two together during the previous books. Breathless sets the story up nicely, with the transition into Secret an easy one, thanks to what we have learned during it.

I have to say, I adore how Brigid Kemmerer has written this book. I mean, I've loved all her books; they're all expertly told, with perfect writing and attention to detail, but Secret seems so much more emotional and confronting at times than some of the previous books. Brigid Kemmerer has created a fantastic supernatural series with this series, but I think her ability to explore deeper issues, real, moving issues at times is what makes this series so much more special.

Nick Merrick is an air elemental. He's popular, attractive and he's always there for his family when they need it. He's smart, kind and reliable. He's got a loving family, a great girlfriend and it genuinely seems like he has it all. Only Nick is hiding a secret; one that he fears will tear his life apart. Nick Merrick is gay.

I've mentioned it before, but I'll say it again. I was really surprised to find out Nick was actually gay in this book. In terms of characterisation, even though he is a nice guy, Nick has always just faded into the background for me. And with so many personable characters in this series, it would have been so easy for Kemmerer to leave him there, lost amongst the more dominant personalities. Instead, Brigid Kemmerer gave Nick substance. She gave him character. She made him real. And I can't give her enough props for that!

As Secret unfolds and Brigid Kemmerer details Nick's uncertainty and his insecurity, I have to admit..... I fell so deeply in love with Nick Merrick I almost have no words. Watching him struggle with himself over what he wanted and what he felt was just heartbreaking, and so very emotional. Nick's anguish over what he is and his fear of coming out to his brothers just bleeds through the pages and Kemmerer does a fantastic job utilising that within the story. I was hastily turning pages and reading because I needed to know that Nick's story would turn out alright. I needed him to find peace with himself and those around him. I needed it.

Throughout the story, one of the big focus's is Nick's relationship with Adam, the first boys he's ever been so attracted to that it forced him to confront what he felt. I was so pleased with Adam and Nick's relationship. Brigid Kemmerer writes it so well; with Nick uncertain, unsure and giddy and excited. It was the start of first love, and boy and girl, or boy and boy....it couldn't have been written better. It was simple and complicated and endearingly sweet. Nick and Adam just fit. And I loved that!

Told in dual POV, both through Nick and Quinn's eyes, Secret spends as much time following Quinn as it does Nick. Quinn Brisco is Nick's girlfriend turned "girlfriend" and happens to surprise me a lot in this book. I have always liked Quinn, although there have been a few moments in the last couple of books where I've questioned some of her actions and decisions. Having read Secret I think I finally understand. Brigid Kemmerer continues to do what she is good at with Quinn; writing unexpectedly layered characters with flaws, issues and real problems. Exploring Quinn's home life we discover the abusive environment she lives in and suddenly her actions take on a new meaning.

Quinn struggles to let people in. She keeps secrets about her life and what's really happening and it's actually quite sad. Especially with the realisation that it's quite life like. That being said, in the story, Quinn finds an unexpected saviour in the form or Tyler Morgan. Yep. Remember him? The arrogant and cruel Elemental who has tormented the Merrick brothers for years? Well, in Secret, Tyler becomes Quinn's white knight in many ways and unexpectedly turns out to have a heart. Though there are many fences to mend between he and the Merrick brothers, Brigid Kemmerer adds another layer and dynamic to the story introducing Tyler as someone who has made bad choices and mistakes, but who actually has a kinder side. One he reveals to Quinn.

Mixed in amongst the emotional developments experienced by both Nick and Quinn in Secret is the ongoing storyline of the Guides that continue to hunt the Merrick brothers and Hunter. As secrets come to light, alliances change and truths are faced, all in the lead up to the third and final book, Sacrifice.

Brigid Kemmerer has introduced her readers to a family plagued by tragedy, but bound by their love and devotion to one another; hooking us all with each subsequent story and reeling us in each time. As the series draws to a close, I have no doubt the final book is sure to be an explosive conclusion!

Source: Sent for review by Allen & Unwin (Thank you Lara!)
Format: Paperback
Buy it: Bookworld | The Nile | The Book Depository | Amazon
My Recommendation: This series is a MUST READ! Trust me--you don't want to miss out on these boys!
Cover: I adore the covers in this series and this one is no exception. Our Aussie ones rock!
Will I read sequel/continue with series: Without a doubt!