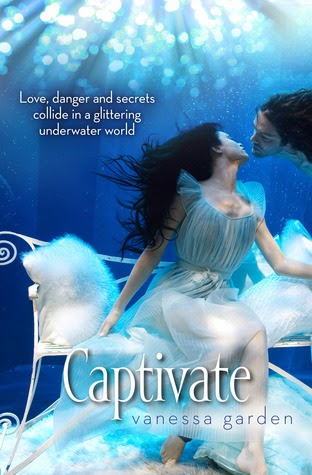 In a glittering underwater world, nothing is as it seems...

For the past twelve months since her parents’ death, seventeen-year-old Miranda Sun has harboured a dark secret — a secret that has strained the close relationship she once shared with her older sister, Lauren. In an effort to repair this broken bond, Miranda’s grandparents whisk the siblings away on a secluded beach holiday. Except before Miranda gets a chance to confess her life-changing secret, she’s dragged underwater by a mysterious stranger while taking a midnight swim.

Nineteen-year-old Marko intends to marry Miranda in order to keep his crown from falling into the sinister clutches of his half-brother, Damir. There’s only one problem. Miranda is desperate to return home to right things with her sister and she wants nothing to do with Marko. Trying to secure her freedom, Miranda quickly forms an alliance with Robbie — Marko’s personal guard. However, she soon discovers that even underwater, people are hiding dangerous secrets...

Captivate is a delightful debut by Aussie author Vanessa Garden and a lovely start to what promises to be an interesting series set in a magical underworld world full of love, danger and secrets!

Having read the premise of this story—an Australian teenager, kidnapped and swept up into an underwater world—my first thought was quite understandably "mermaids!" I experienced both disappointment and delight to discover that this wasn’t actually the case. Choosing not to go down this path, Vanessa Garden has penned an intriguing story with Captivate.

Whilst I’m being honest, Captivate wasn’t quite as addictive and beguiling as I’d hoped but it did make for an enjoyable read. Set in the lush, underwater world of Marin, Captivate follows Miranda Sun after she is kidnapped and brought to a land deep under the sea for mysterious and questionable reasons. Reasons we discover as the book progresses that intertwine with the history of those who call it home.

I liked the world Vanessa Garden has created in Captivate. It’s beautiful and lush, with the origins of these underwater people and how they came to live under the sea, in this dome like enclosure so sufficiently, different from what I’d read before. The characters, including heroine Miranda were likable and easy to read about, even if they were basic and their relationships predictable. Marko was alright as the king of Marin and Miranda’s main love interest and Robbie as Marko’s guard, friend and Miranda’s kidnapper/friend.

Miranda and Marko’s romance came on swiftly, but with both characters going into it with their eyes more or less open to the others motive and feelings this didn’t bother me too much. And yet I wasn’t blown away by their romance. It just was.

Don’t get me wrong, the characters were in no way lacking personality or likeability, but at times I felt disconnected from their plight. Captivate was just missing that something more for me. That special, often unnamable quality that takes a book from good and okay to brilliant and beyond.

That being said, I did like this story. There were a number of different story developments and revelations that kept me on my toes and I truly do want to see what decisions Miranda will make and whether she will return to Marin. I foresee a love triangle in the future between Miranda and the two men in her life, and though personally I’m over them myself, I think Vanessa Garden will explore this avenue.

With an interesting plotline and a lavish setting, Captivate was enough to whet my appetite and leave me wanting me. I look forward to what trouble’s await Miranda with her possible return to Marin and wonder what Vanessa Garden has in store for her heroine next!

Source: Sent for review by HarlequinTEEN Australia (Thank you Polina!)
Format: Paperback ARC
Buy it: Bookworld | Kobo | Amazon
My Recommendation: If you enjoy fantasy, this underwater tale might just be exactly what you're looking for :)
Cover: Honestly, I think the cover is quite beautiful--love the underwater feel of it!
Will I read sequel/continue with series: I think so, yes. I'd like to see what happens next with Miranda and Marko