Welcome to the Blog Tour for Emblazed, the second book in Connie L. Smith's Division Chronicles and as part of the tour I have a really cute excerpt between the main character and her boyfriend to share with you, as well as details on the Twitter giveaway's Connie has going on to celebrate the release of Emblazed! 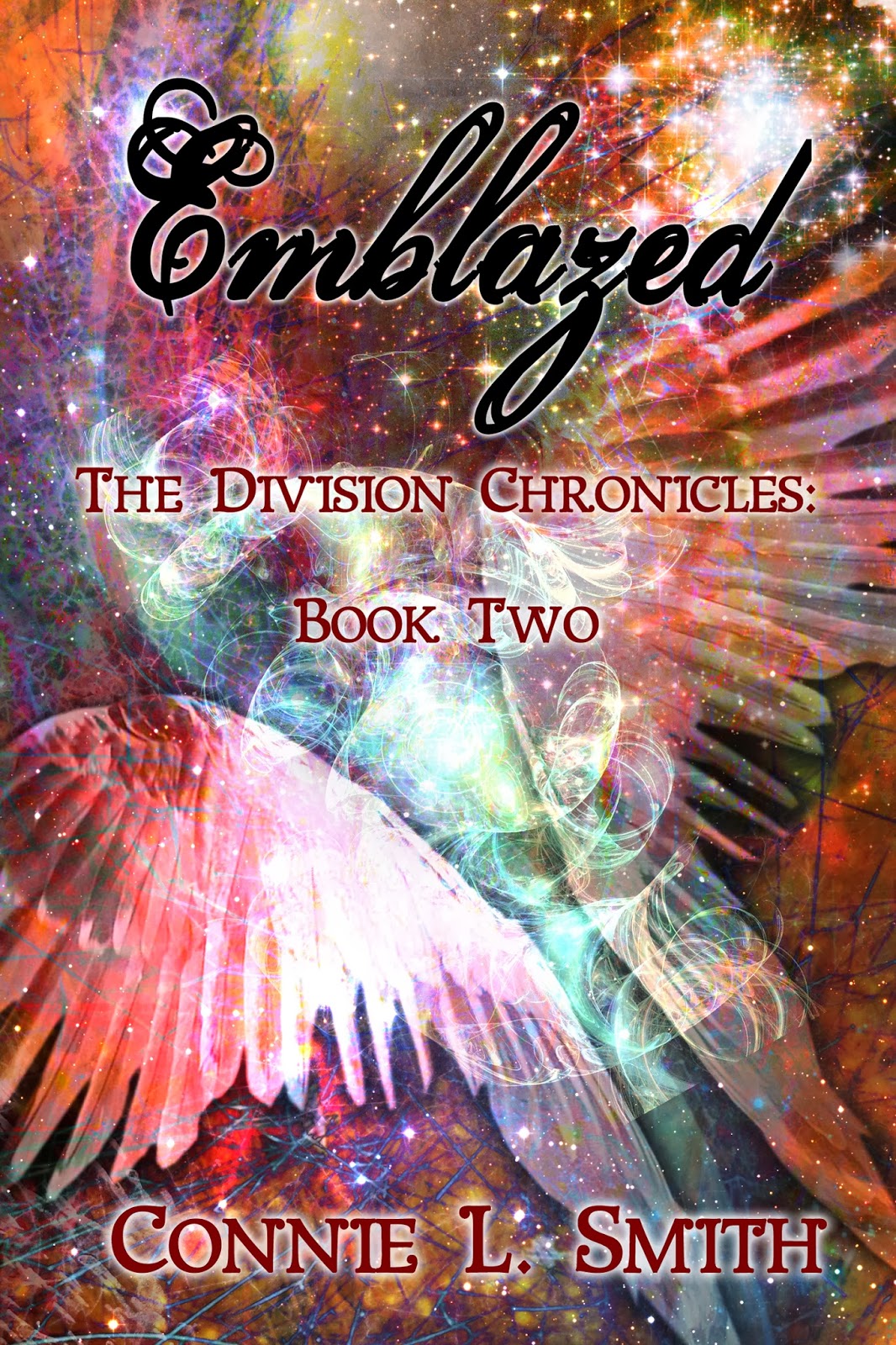 After all the preparations, Nicholai’s warriors stand on the threshold of warfare, the demons entering the realm in battalions and the world unknowingly depending on the army’s success to continue intact. But the battle is only the beginning of deadly struggles, and the soldiers will soon realize how little they know, how many things are at stake, and how much they have to lose.

Love, hate, hope, despair, anguish, joy… The journey is a gauntlet of emotion and combat, threatening their resolve as much as their lives.

Will their training and ties be enough, or will the complications and the forthcoming evil forever cripple the world’s last hope of survival?


Don't forget to add Emblazed on Goodreads or get it on Amazon!

AJ sensed him there, standing wordlessly some feet in the distance, just like she always recognized his presence when he lingered near. She absorbed the comfort and happiness he brought her – not that she’d admit that out loud – before sighing and speaking. “It’s called making a bed, Julius. It’s pretty commonplace.”

He didn’t push away from the doorframe, instead leaning further against it while he continued to observe her. “Sweetheart, nothing’s commonplace when you do it.”

Hearing the grin and affection in his voice, she smiled, peeking at him over her shoulder. “Is that a compliment or an insult?”

He gazed upward to stare at the ceiling with a thoughtful expression, then returned his attention to her, his shrug carefree. “Both.”

“Odd ball.” He finally moved from the threshold, unhurriedly advancing toward her. “

You know, most people make their beds in the morning. Not ten o’clock at night.”

She snorted. “Yeah. I’m gonna make my bed as soon as I roll out of it at six AM. I wouldn’t be making it now if I didn’t have to wrestle the sheet back on four times a night.” Finally setting her pillow in its position, she turned to him with an unashamed grin.

He chuckled, his adoration plain, and brushed a lock of hair from her face. “You’re one of a kind, you know that?”

“Compliment or insult?” she teased again.

“Compliment.” He smiled, cupping her cheek. “Definitely a compliment.”
“Sweet talker,” she repeated, standing on her tiptoes to press a kiss to his lips. Wrapping her arms around his neck, his circling her waist, she dove into the moment, reveling in the wonderful sensations only Julius incited. Safety. Warmth. Passion. So many more she couldn’t quite put a name to, the combination too heady and consuming to adequately decipher. It was simply a Julius effect, and its wonder had no equal in her life. Gradually breaking away, she knowingly lifted an eyebrow. “You didn’t come here just to make fun of me over my bed-making habits.”

“Maybe I came up here just to kiss you.”

“If that were the case, dear Julius, you wouldn’t have waited until I kissed you.”

Narrowing his eyes, he barely restrained his smirk at her forwardness and how well she’d grown to understand him in their time together. “You have a point.” He stepped back from her embrace, grasping her hand in his. “Come on. We have a mission.”

“A mission?” Her brow furrowed, though she made no move to retrieve her palm from his, following him in confusion as he neared the hallway. “At ten o’clock at night?”

“I believe we already covered the time in this conversation, AJ.” He made a clucking noise with his tongue, shaking his head in mock disappointment. “You really need to keep up with matters a bit more.”

She glared at the back of his head, lips thinning despite her vexing boyfriend’s inability to see her from his location. Realizing the futility of her frustrated efforts, she clenched the fingers he clutched, smiling in accomplishment at his grunt of discomfort. “Yeah, we covered it, but in household chore way. Not in a mission way. What could we possibly have to do this late at night?”

He sent her an amused glance – one she deemed condescending, particularly after the physical hint of her annoyance – while tugging her through the doorway. “You do realize it isn’t ten o’clock everywhere, right?”

“Of course I realize that! I’m not a moron!”

“I never said you were…”

She growled, steeling her feet against the floor and prying her hand from his. “You didn’t have to. Your little grin said it all for you.”

His stare revealed sincere bewilderment – maybe a speck of frustration as well – and his arm dropped to his side. “So let me get this straight. You’re angry at me… because I smiled at you?”

Her eyes widened in fury, one finger raising to point at his chest while her left fist braced against her hip. “Don’t try to turn this around like I’m crazy!”

He scrunched his forehead, gaze traveling up and down her form while he held his hands out, as if silently offering his evidence.

She groaned, unhappy, turning away from him to rein in her irritation. For several seconds, she simply scanned her room, livid exhale after livid exhale falling from her lips, but the attempts did little to calm her turmoil, Julius actually flinching when her focus again landed on him. “It’s the grin you used. It’s the same one that was on your face when you drove into New Mexico, and I was surprised the facility was stationed here. Like I’m the dumbest person in the world and your number one source of entertainment.”

Instantly, his expression softened. “You can’t possibly think that I think that way?”

She just glared at him.

“Look, I’m not gonna lie.” He approached her, smiling tenderly. “You do amuse me, but not because I think you’re stupid. You’re… animated. And quirky. But not stupid. And I get it’s late, and no matter what time zone we’re entering, it’s ten o’clock here and we’re handing over sleeping hours, but Nicholai insists we need to go now.”

She kept pinched eyes on him, but her posture loosened a bit.

He laughed, reaching for her hand once more. “See? Animated. I can pretty much watch the wheels in your head turn.”

“Does that make you my mental stalker, too?”

Processing the playful edge of her words, he kissed her knuckles and led her into the hall. “Trust me, sweetheart. I have no desire to wander through your mind. I can’t imagine all the weird things I’d encounter.”

She tilted her head to the side, smiling. “Compliment or insult?”

Smirking over his shoulder, he caught her eyes with his. “Insult.”

In celebration of Emblazed recent release on February 24th, the first book in the series, Essenced is currently FREE on Amazon, so be sure to grab your copy while you can! 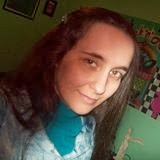 Connie L. Smith spends far too much time with her mind wandering in fictional places. She reads too much, likes to bake, and will be forever sad that she doesn’t have fairy wings. And that she can’t swing dance. When she isn’t reading or writing, there’s a good chance she’s goofing off with her amazing, wonderful, incredible, fabulous nieces and nephew, or listening to music that is severely outdated. She has her BA from Northern Kentucky University in Speech Communication and History (she doesn’t totally get the connection either) and likes to snap photos. Oh, and she likes apples a whole big bunch.

Twitter Giveaways: As mentioned, Connie L. Smith is hosting a bunch of Twitter giveaway's to celebrate Emblazed's release so be sure to head on over to check it out!

Congrats to Connie on the release of Emblazed and thanks for allowing me to be a part of the celebrations!