Today I'm thrilled to be sharing an excerpt from Cate Ellink's The Virginity Mission as part of Escape Publishing's 1st Birthday celebrations!

I recently had the pleasure of reading this book (review to be posted later on!) so I'm thrilled to share with you today a sneak peak at the first chapter. If this doesn't make you want to read the book as it did me I don't know what will!

My eyes are drawn to movement. Someone jumps onto the back of the truck and I blink. Once. Twice. My stomach and pelvic floor collide.

Shoulders loom from a snug khaki singlet that ripples across his stomach as he moves. Camouflage trousers do nothing to disguise his tightly rounded butt as he bends over to grab the first backpack to stow. This military man is all lithe, controlled power. He climbs over the back of the truck holding someone’s gear as if it weighs nothing. Those shoulders are massive bunches of corded strength. His arms aren’t hugely bulging but deliciously defined. A sudden desire to have those arms wrapped tightly around my naked flesh burns my brain. Dear God, I’ve lost my mind.

I’m on a scientific expedition. Learning is the key to the next six weeks in the north Queensland rainforest—it’s not a sex tour. I’ve never been to the tropics before and I’m eager to find out everything I can. I’m here to contribute, not drool, although if someone catches my eye I won’t say no. But the army men are here to work and they’re not allowed to fraternise with us. It was mentioned more than a few times in last night’s briefing.

Standing in line while waiting for my gear to get packed into the truck, nothing can stop my eyes returning to the army guy. People around me are talking but it’s only background noise. My attention is otherwise occupied.

His dark, close‐cropped hair shines with exertion but he doesn’t break stride. He keeps lugging another piece of gear, piling it into the truck as if it weighs nothing. Each piece packed neatly and effortlessly.

Each movement is fluid. Every muscle bending and flexing in perfect accord. He’s like a sleek black panther—all coiled muscle ready to pounce. It’s so damn sexy I can’t look away. My mouth is drying as I watch and every drop of moisture is heading south.

I’m seriously attracted but my mind is overriding my body’s reaction. Hey, dimwit, do you think he’s interested in you? Heck, he must be thirty and you’re a kid. He’ll be married. Far too experienced. He’ll never notice you. He’s a panther—stunning but unattainable. Hands off.

My self‐doubting mind keeps up a constant barrage of disparaging remarks while my body gives in to lust. Moisture is slick along my thighs as I wriggle from one foot to the other, hoping to mop up the excess before my lust becomes obvious to all. I keep looking away, trying to regain my sanity but my gaze flicks back to that truck. At times my breathing is normal but then it jams in my throat, usually when a muscle flexes, or his butt is in profile or his shoulder muscles bunch. The closer I get to handing him my backpack, the more riotous my mind and body become.

My mind is telling me I’m an idiot at the same time my imagination is running riot. What would it be like naked against his body when there’s so much sweat on his skin? Would we slip against each other easily? Tangled together as one. Would his sweat taste of strong musky male?

My knees almost buckle beneath me. My mouth is dry and I can’t even wet my lips. I make myself stop imagining. 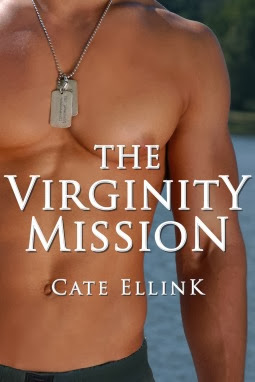 It’s lust at first sight when Mac sees Jason shirtless and sweating on the back of a truck. Jason is the army sergeant assigned to support the six‐week scientific expedition that Mac is participating in, and might just be the perfect candidate for another journey of discovery that Mac is desperate to undertake — sex.

Fraternisation between students and staff might be strictly prohibited, but everybody knows fruit always tastes better when it’s forbidden

Cate lives near the beach in NSW, Australia, with a long-suffering husband.

Details:
For your chance to win a NA bundle featuring The Virginity Mission by Cate Ellink as well as four other fabulous stories, be sure to comment with a way to contact you!
Sharing isn't necessary, but always appreciated :)
Open internationally!
**Stop back on Tuesday for another fabulous excerpt from Chains of Revenge by Keziah Hill and yet another giveaway!**