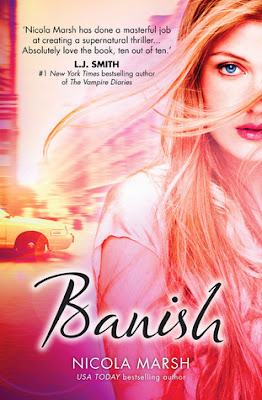 Alyssa has one week to destroy her enemy, save her spirit... and save her soul.

After her ex-boyfriend commits suicide and her mum’s alcoholism sparks yet another psychotic episode, seventeen-year-old Alyssa Wood flees her small hometown of Broadwater and heads to New York City to stay with her bohemian aunt — a Wicca High Priestess.

Alyssa revels in the anonymity of a big city and her new life. Her grades climb, she has a new best friend, and a new guy: the sexy geek Ronan — a saxophone player who prefers jazz to pop.

But her newfound peace is soon shattered when she sees a dead body in one of Ronan’s music clips — and she’s the only one who can see it. Worse still, Alyssa recognises the body that has been murdered a week forward!

Alyssa doesn’t believe in the supernatural...despite her family’s Wicca background. So how will she overcome evil when it’s closer than she thinks?

Banish by Aussie author Nicola Marsh is a mysterious thriller with just a hint of the supernatural that will have you guessing who's behind the strange goings on in our heroine Alyssa's life until the very end!

Heading into Banish, I must be honest....I had high expectations. The cover was stunning and the premise looked promising, so I was anticipating a thrilling read, but unfortunately this book was a bit of a mixed basket for me. In Banish, Nicola Marsh introduces us to Alyssa Wood, a teenager who has moved to New York to live with her Wiccan aunt after losing her boyfriend and on the back of her mothers mental deterioration but who ultimately finds the past won't the past.

I really wanted to like Banish, I did. However, I struggled from the very beginning to get into this story. Banish's storyline had real possibility, especially when coupled with a witchy element woven into it, but while Banish did ultimately pick up just after halfway I still felt it fell flat.

For the most part, I didn't feel one way or another over our main character and protagonist, Alyssa. I neither loved her nor did I outright her but I did have my problems with her. Considering she grew up in a household where Wicca was such a fixture and magic played such a big role in her mothers, and aunts life, I felt author Nicola Marsh made too big a deal over Alyssa's inability to believe. Don't get me wrong--I understood the purpose of knowing Alyssa was a non-believer to the storyline, but after the first half of the story, I felt as though this fact was really being shoved down my throat. And I came to resent this.

Nicola Marsh's inclusion of Roman in the form of Alyssa's love interest really confounded me. Taking into consideration that these two already know each other when Banish opens up, their relationship came across as lacking and inconsequential. I almost felt Marsh added it in simply to have a relationship in the story. Don't get me wrong, I loved Roman. He was likable and quite sexy in his geeky, suave way and a delightful enigma in the story with his different musical inclinations. In fact, I would have liked to have seen more of him, but from what I saw he and Alyssa's chemistry was a fine simmer--it didn't really go anywhere and to me seemed unnecessary.

The mystery of this novel I did like and the way everything made sense in the end when the mystery surrounding the strange occurrences in Alyssa's life is revealed. Everything tied in well and even I was questioning who and/or what could be behind it all.

Overall, Banish wasn't a bad read, it just wasn't necessarily for me. However, if you're a fan of mystery and thrillers with just the perfect splash of magic and supernatural thrown in then Banish may just be for you.

Source: Sent for review by HarlequinTEEN Australia (Thank you Polina!)
Format: Paperback
Buy it: Bookworld | The Nile | Amazon (Kindle)
My Recommendation: If you enjoy supernatural thrillers then perhaps give it a go.
Cover: Love this cover--seriously! It's awesome!
Will I read sequel/continue with series: No. Unfortunately, this book wasn't for me.