I'm really excited to be participating in the Aussie Blog Tour for Jump: Twinmaker by Sean Williams thanks to the fantastic folks over at Allen & Unwin!

Having hit store on October 23rd, Jump: Twinmaker is the first book in the new series by New York Times bestselling author Sean Williams; a man who has had quite the impressive writing career. Not is he a number one New York Times bestselling author, but he's written multiple Star Wars stories and has co-written with Garth Nix! Seriously cool career so far and he's not done yet! 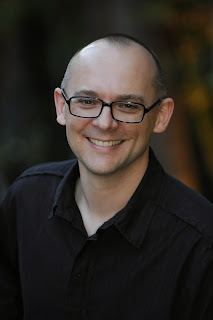 Hello Sean, and congratulations on the recent release of your latest novel Jump: Twinmaker 1! I know it must be a really busy and exciting time for you right now, so thank you for agreeing to take the time to answer some of my questions.
Let's jump straight in, shall we? No pun intended ;)

Jump released nationally in late October, so for those out there who haven't had the chance to read Jump yet, can you describe it in one sentence?
Jump is a thriller about a girl whose best friend tries an illegal trick to become more beautiful, with terrible consequences for everyone around her.

Jump features such a different and intricate storyline – can you tell us how you found the inspiration for the story?
I’ve always been interested in the technology that lies at the heart of the story, so Jump really began when I got the idea to combine that technology with urban myths and anxieties about beauty. Sadly, I don’t remember where the idea came from or when exactly it happened, but I do remember talking about it with Scott Westerfeld, author of the Uglies series. We’re both looking at similar things in different ways, with hints of dystopian futures and stuff, so his input was really helpful.

Jump’s heroine, Clair, lives in a world where d-mat, a teleport system that allows individuals to go anywhere at any time, is an everyday fixture. How important was it to get the science behind the idea of d-mat right? Did a lot of research go into supporting the plot of the book?
You’d think that with 3-D printers and quantum teleportation (a real thing, right now) we’d be getting very close to something like d-mat, but unfortunately the technical hurdles are enormous. One human body contains much more information than we could possibly store in all the world’s servers, and it would take longer than the lifetime of the universe to send it anywhere. But, you know, things that seemed impossible in the past are now commonplace, like powered flight, so one should never say never. I tried to make it seem as real as possible without getting bogged down in that particular discussion.

I've noticed lately that a lot of male YA writers have chosen to have a female protagonist rather than a male. I was wondering if you could tell us why you chose to have a female protagonist - was there a reason behind this choice or was it just something you felt like doing?
Basically, I don’t understand guys and don’t like spending all my time in their heads. That might seem strange, since I am a guy - a guy who doesn’t like sport, who likes to buy hats, bags and shoes, who doesn’t drink beer, and who never goes anywhere near the barbecue (the conversation is always more interesting in the kitchen) but still a guy. Or maybe it makes perfect sense that I don’t like writing guys, since writing is all about getting into the head of someone who’s different from you. Either way, I like written from the female point of view. For a while I tried to tell the story from Jesse’s point of view, and also from Q’s, but it wasn’t until I realised that it was Clair’s story that it all started to come together.

I don't understand guys either. As far as I'm concerned they're a foreign language ;) Jump has a very diverse band of characters. Is there anyone you would like to feature in the rest of the series a little more than others?
The person we haven’t met yet is Oz, Clair’s stepfather, and I’d like to see him at some point. I have teenage stepsons and I’ve had complicated relationships with my own boys, not to mention my own dad, so fatherhood is something I often explore in my writing. I’d be surprised if he didn’t make an appearance at some point. Apart from him, though, I’d have to say that I want to see more of Q. She’s changing so fast and learning so much. Who knows what she’ll be like when Clair sees her next? (Actually, I do, but I’m not telling. Yet.)

Yay! I'm super excited to be seeing more of Q in the next book. I loved her! Anywhoo, let's talk a little about you, what's something we'd be surprised to know about you?
I like DJing, and reasonably often spin some great old 80s tunes (well, I think they’re great) at parties and science fiction conventions. It’s a bit daggy, but it’s a way of indulging my other true love: music.

If you could use d-mat, where is the first place you would go?
On Earth, probably the Antarctic. I’ve always wanted to go there. If there were d-mat booths in space, I’d go to the Moon. Dressing for both would be a hassle.

You have quite an impressive writing history - did you always plan on becoming a writer?
Pretty much. I’ve always enjoyed stories, and as soon as I learned to write I started telling my own. It took a while, and a few false starts, before I really got going. In fact, it took about ten years from the time I dropped out of uni to become a writer to be being able to support myself entirely from writing, but perhaps I should have expected that. What’s that Japanese saying? “It takes a thief ten years to learn her trade.” I think that’s true for anything, perhaps especially for writing. Even though we do it every day, one way or another, we have to write differently for fiction, which means learning new skills and unlearning some old ones. It takes a lot of practice.

If you had to be stuck in an elevator with any three people, real or fiction, alive or dead, who would you want to be stuck with and why?
Frank Zappa, Francis Poulenc, and Alison Goldfrapp. The first two because they’re amazing musicians and I’d love to hear what they had to say to each other (even though they’re both dead). Alison because she’s my favourite singer in the whole world, and I think she’d be nice to chat to.

The second book in the Twinmaker series, Crash, is set for release next year. How are you going with writing Crash? Any hints as to what readers can expect?
I’m editing Crash right now, as it happens. It’s done and I’m really happy with it, but it just needs some tweaks to be perfect. There are new characters, new adventures, and old threats. It’s a different kind of thriller than Jump. Instead of chasing something, Clair is now the one being chased - not just by the dupes but by the consequences of her own actions. She’s smart and capable, but she’s not perfect. Until she finds what she really wants to be she’s going to struggle, but when she does, well, the bad guys had better watch out.

Thanks again for stopping by and I'm very much looking forward to the release of Crash next year!
My pleasure! Thanks for having me.

#1 New York Times bestselling Sean Williams lives with his family in Adelaide, South Australia. He’s written some books--thirty-nine at last count--including the Philip K. Dick-nominated Saturn Returns, several Star Wars novels and the Troubletwister series with Garth Nix. Twinmaker is the first in a new YA SF series that takes his love affair with the matter transmitter to a whole new level. You can find some related short stories over at Lightspeed Magazine.

Some of Sean's previous work: 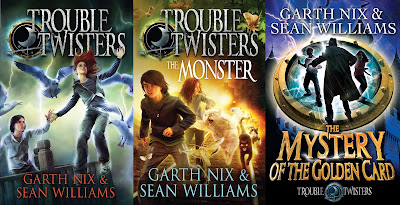 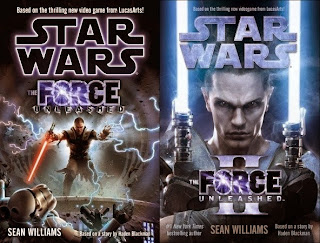 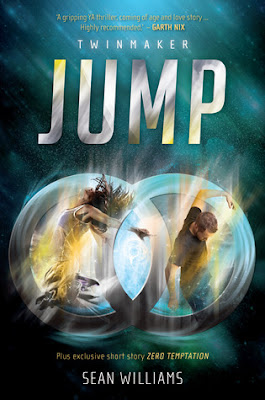 Clair lives in a world revolutionised by d-mat, a global teleport system that allows people to transport themselves instantaneously around the world. When a coded note promises improvement – the chance to change your body any way you want, making it stronger, taller, more beautiful – Clair thinks it’s too good to be true, but her best friend, Libby, is determined to give it a try.

What starts as Libby’s dream turns into Clair’s nightmare when Libby falls foul of a deadly trap. With the help of Jesse, the school freak, and a mysterious online friend called Q, Clair’s attempt to protect Libby leads her to an unimagined world of conspiracies and cover-ups. Soon her own life is at risk, and Clair is chased across the world in a desperate race against time.

The rest of the series (Coming Soon!) 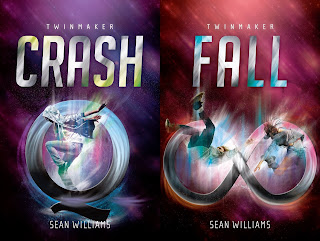 
Published by Allen & Unwin, Jump: Twinmaker is available now online and in all good bookstore--be sure to grab your copy!