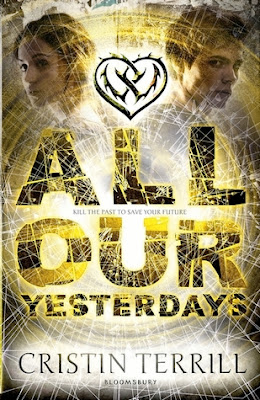 Imprisoned in the heart of a secret military base, Em has nothing except the voice of the boy in the cell next door and the list of instructions she finds taped inside the drain.

Only Em can complete the final instruction. She’s tried everything to prevent the creation of a time machine that will tear the world apart. She holds the proof: a list she has never seen before, written in her own hand. Each failed attempt in the past has led her to the same terrible present—imprisoned and tortured by a sadistic man called the doctor while war rages outside.

Marina has loved her best friend James since the day he moved next door when they were children. A gorgeous, introverted science prodigy from one of America’s most famous families, James finally seems to be seeing Marina in a new way, too. But on one disastrous night, James’s life crumbles apart, and with it, Marina’s hopes for their future. Now someone is trying to kill him. Marina will protect James, no matter what. Even if it means opening her eyes to a truth so terrible that she may not survive it. At least not as the girl she once was.

All Our Yesterdays is a wrenching, brilliantly plotted story of fierce love, unthinkable sacrifice, and the infinite implications of our every choice.

Cristin Terrill's debut novel, All Our Yesterdays, was an unexpected and at times thrilling read, that will entice with it's exceptionally well thought out concept, action and hint of romance.

In all honesty, this book is a really hard book to review. All Our Yesterday's had a fantastic premise and a tone of potential. And even though the story gets off to a slow start there are times as the story progresses that it really does live up to this potential. Admittedly, it did take a while for me to become absorbed in the novel and it wasn't until the story picked up pace that I found myself eagerly turning pages but for the most part it was an enjoyable read.

Following main characters Em and Finn during their decent into the past to change it before the unspeakable happens, All Our Yesterdays is told in the dual POV of Em and Marina, the girl Em once was before her world fell apart. In order to save the people they love and to prevent the world from becoming the horrendous, broken place they know it to be....Em and Finn must make the hardest choice they've ever had to make...to kill the boy that was their best friend and Em's first love.

This concept was a really intriguing one to behold. Cristin Terrill does a terrific job detailing the two forms of the one young woman: Em as we first meet her and Marina, the innocent, unknowing girl she was before her world fell apart. I did found it a lot easier to connect with Em than I did Marina and I emphasized with hers and Finn's plight more so than their alter-ego's from the past. Their story seemed to have more fire and you understand how high the stakes are---they can either kill their friend or allow him to create something that will alter the world forever.

All Our Yesterdays was for the most part quite fast paced. After it's innitial slow build, Em and Finn are on a race against time to do what they have to do before an unknown enemy follows them into the past and stops them permanently. The mystery that surrounds this enemy isn't actually a hard one to figure out. Both Em and Finn's actions made it quite easy to put together.

My big issue with All Our Yesterdays was that I really feel like a big chunk of Em and Finn's story was missing. We see them in the past as well as in the present, but the in between moments when they go from the people they were to who they are now is missing, and as a reader I really wished I could have seen them grow into those people.

Racing towards a climactic final few chapters, there are a few unexpected shocks and developments. I must admit though I find myself really confused by the ending of All Our Yesterdays. It came on a bit abrupt and the resolution to the whole situation Em and Fin found themselves in left me confounded as to how it all worked. The possibility of a sequel would be very welcome as far as I'm concerned as I honestly don't feel as though their story is complete.

Issues aside, All Our Yesterdays features a mostly riveting plotline and is filled completely with severity, danger and hard choices. Human nature is put to the test in this book that is an enjoyable story and worth a read!

Source: Sent for review by Bloomsbury Australia (Thank you Sonia!)
Format: Paperback
Buy it: Bookworld | The Nile | The Book Depository | Amazon
My Recommendation: Fans of a fun, engaging dystopian will enjoy this.
Cover: Unfortunately the cover doesn't do much for the story, although the colour is awesome!
Will I read sequel/continue with series: Most likely, yes.