Book Shelf: The Restorer (The Graveyard Queen #1) by Amanda Stevens 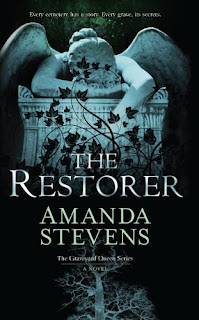 My name is Amelia Gray. I'm a cemetery restorer who sees ghosts. In order to protect myself from the parasitic nature of the dead, I've always held fast to the rules passed down from my father. But now a haunted police detective has entered my world and everything is changing, including the rules that have always kept me safe.

It started with the discovery of a young woman's brutalized body in an old Charleston graveyard I've been hired to restore. The clues to the killer—and to his other victims—lie in the headstone symbolism that only I can interpret. Devlin needs my help, but his ghosts shadow his every move, feeding off his warmth, sustaining their presence with his energy. To warn him would be to invite them into my life. I've vowed to keep my distance, but the pull of his magnetism grows ever stronger even as the symbols lead me closer to the killer and to the gossamer veil that separates this world from the next.


This book was different from a lot of supernatural books I’ve read. The paranormal part wasn’t the main focus; instead it wove in and out of the story. It was a mysterious thriller, haunted and eerie. I actually had goose bumps once or twice and there was no mistaking the way the story drew me in. This wasn’t a fast paced novel, buy any means, but it was interesting and intriguing regardless. There was always something happening; a new discovery being made, a new issue being faced and the book kept me guessing all the way until the end. It was a real who-done-it and I was lost to the story and the tale--it was like watching a really good crime thriller on TV!

I thought the idea of Amelia’s ability to see ghosts and way the ghosts interacted with the living was very well done. It was such a different take on the medium-like people we see so much nowadays that communicate with the dead. Amelia was nothing like any of the other characters I’ve met and the way she interacted--or more accurately--didn’t interact with them was different. Here we see that the dead are not to be spoken to and that it’s pertinent that they are not interacted with. They mustn’t know that a person can see and hear them and they must remain unawares of someone’s ability to see them.
The author, Amanda Stevens has done a fantastic job with the intricate details and it was fascinating to get such a great insight into cemeteries and burials. I had no idea of the powerful mythology behind cemeteries and graveyards and I had no clue how important symbols on headstones were to the individual buried within the grave. It was very cool to see and I loved Amelia’s job and role. A graveyard restorer is such a unique job and I think Steven’s has done a fabulous job incorporating aspects of this within the book. It’s like nothing I’ve ever seen before.

I thought Amelia was a very good character. She was very basic and yet she was brave and strong, while still having her weaknesses. She had her fears, but she chose to face them, rather than run from them and I liked that. She was very realistic and enjoyed following her on her tale.
Now Devlin, hmmm, he was an interesting one. He was such a contradiction of his self. I couldn’t help but feel for him, having lost his wife and daughter and I wanted to see him trust Amelia, which he did a little bit at a time. And yet there’s soooo much about him we still don’t know. He’s mysterious, and silent and hiding so much of himself. It may take a very long time for him to ever actually let someone in, but I’m hoping to see him let Amelia in over the course of future books. The two of them could have real potential. There is chemistry between them. It’s buried behind Devlin’s professional and hard attitude, but it’s there when they have real moments together and I want to see how far it can go.

I admit that I had no clue as to who was behind the murders until the killer was revealed at the end. The motive, means and the involvement of “Order of the Claw” were all thrown around throughout the story and I admit the reason for everything was not what I was expected—and I loved that!
My only issue with the book was that I felt the ending was a tad abrupt. It seemed like it came before everything was resolved, things with Devlin and Amelia and his place within the Order and everything. Is he really part of it? What does it mean if he is?
I’m excited about the prospect of the second book though. The ending clearly tells us that Amelia and Devlin’s story isn’t through and that there is something more to her father and the ghost world that is out there.
I’m looking forward to the next book and discovering more of this world. This was a unique, fresh new take on ghosts and a great debut by an interesting new author. I recommend .

You can buy it here: