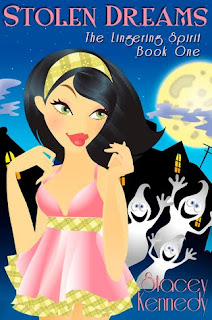 Tess Jennings has the ability to see and talk to spirits. On a daily basis, they harass and annoy her to save their souls. Sometimes she helps, other times she ignores them, but one ghost will give her no choice. Kipp McGowan, a cop with the Memphis Police Department, uses his ghostly charms to gain her attention and forces her to expose herself to his partner.

As she’s pulled into the five year old cold case of Hannah Reid she wants no part of, she finds herself in more than one precarious situation. But that’s the least of her worries―Tess begins to have a serious problem on her hands. Kipp might be dead, but he’s drop-dead gorgeous and she’s beginning to forget that he’s a ghost.

Murder and corruption has brought Tess and Kipp together. But as her feelings for Kipp deepen, she suspects she just signed herself up for a one-way ticket to the nut house, and can only hope, straitjackets come in a size four.

**First I need to say a big thank-you to Amber over at: http://awesomesaucebookclub.blogspot.com/ and of course Stacey Kennedy for allowing me to win this book!**

I’ll be the first to admit that going into this book I wasn’t sure what I’d get. I was expecting an average tale, okay, but nothing too great. Instead, I got....this. It. Was. Fantastic! It was a quick, quirky, easy read that was both humorous and serious at times too.
The storyline itself was your pretty basic girl-can-talk-to-ghosts tale, something I’d be lying if I didn’t say I’d seen before and yet the story drew me in from the very beginning and wouldn’t let me go.
I found the storyline to be fun and interesting with just the right amount of wit and sass, but it was the characters that made it so much more.
I thought all the characters were perfect with their own perfect place within the story. From Tess to Kipp, to Zach and Caley and others along the way; they were all different and totally awesome.

When we were first introduced to Tess I wasn’t sure I was going to like her. I can’t exactly say why, but I worried for a moment that she was going to be one of those heroines that get on my nerves. Well...she wasn’t! She was fantastic! She was smart and sassy, with a fantastic attitude and a good heart under everything. Tess was a fabulous, independent woman, and I loved her wit and sharp tongue. She was strong, but she was realistic with a vulnerable side that made her more human. She was definitely my kind of gal!
And Kipp! Whoa! Was he smokin’ or what? Don’t answer that—rhetorical question. From the very beginning of the story I could not get enough of Kipp. From the very moment he begun to follow Tess around and bug her I knew this was a guy I was going to like...and did I ever! Perhaps it’s because I’ve always had a thing for cops, but I thought he was one of those great all-round male characters who have it all. He had an amazing heart, but I liked his cocky attitude and naughtiness more of all. I loved how he was able to get to Tess. He knew just what to say and do to drive her insane and it was hilarious watching him get to her the way he did.

The best part of this story was undoubtedly the relationship between Tess and Kipp. The chemistry between them was smouldering; it was hot and feisty and totally caught me from the beginning. The author has written their relationship so well. The way they fell for one another happened over a short period of time, yet never once did it feel rushed or forced and the reasons for why they were attracted to one another and cared for one another made sense and went together perfectly. I thought it was so sweet that Tess didn’t want to develop feelings for Kipp; that she wanted to keep him at a distance, but he was still able to worm his way into her heart.
I thought Zach was a great guy too and it was obvious how close he and Kipp had been before his death. It made me sad at first, but then as the story drew on, I enjoyed the way they still had that comradeship too. I’d love to see more of him in future books, and learn more of his budding relationship with Caley too--now those too are going to be a fire rocket together.

Throughout the whole book I wondered who it was that had killed Hannah and had murdered Kipp too. I admit there were a few people I suspected, but in the end when the actual killer showed up in the story I knew it was him straight away. It was fairly obvious and therefore I wasn’t surprised when it was later revealed.
I found the ending of the book to be abrupt, but I loved it regardless. I worried the whole way through what would happen once they solved the case. Would Kipp leave? Would he move on? Just what would happen to him? I wanted to know, needed to know and I was happy with the ending.
I’m looking forward to the next book. I’m looking forward to seeing more of Tess and Kipp. I’d love for them to find a way to really be together and I want to see what happens now to Zach and the rest of the force; will Tess work for them now? Will they become a crime fighting team...ghost, cop and girl who can talk to the dead? I doubt it, but I still can’t wait!
Bring on the next book!

Rating: **** stars
Recommend: Yes
Did I Buy, Borrow or is it an ARC: I won it
Recommend Buy or Borrow: Buy
Ebook or Actual Book: Ebook
Cover: Doesn't do the book justice
Read sequel/continue with series: Yes!
Posted by Rachel at 11:39 AM