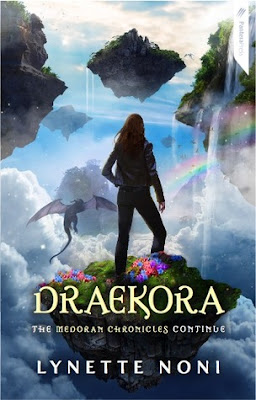 “I swear by the stars that you and the others slain tonight will be the first of many. Of that you have my word.”

With Aven Dalmarta now hiding in the shadows of Meya, Alex is desperate to save Jordan and keep the Rebel Prince from taking more lives.

Training day and night to master the enhanced immortal blood in her veins, Alex undertakes a dangerous Meyarin warrior trial that separates her from those she loves and leaves her stranded in a place where nothing is as it should be.

As friends become enemies and enemies become friends, Alex must decide who to trust as powerful new allies—and adversaries—push her towards a future of either light… or darkness.

One way or another, the world will change…

Draekora is the third instalment in The Medoran Chronicles by Lynette Noni and is another vastly magical and entertaining tale brimming with excitement, adventure and riveting danger fans of Harry Potter and Narnia are sure to fall in love with!

After the shocking ending of the previous book, Alexandra Jennings knows that rogue Medoran Aven Dalmarta will not be content to remain in the shadows forever. Hoping to take advantage of his absence while she can, Alex sets herself two goals; save her friend Jordan from Aven’s control and learn to harness her Medoran abilities so she can take Aven on. When a training exercise goes wrong, Alex finds herself thrust back into a completely different time and as she attempts to get home, Alex learns that all her actions may have an effect on the future and not everything she thought she understood is as it seems. With time running out and the threat of Aven looming, Alex will have to face some harsh truths if she wants to get home….

Ahhh, Draekora. What another great instalment in a thrilling series! Australian author Lynette Noni is cementing herself as one of my favourite Aussie authors with her spectacularly told fantasy series that sucks me in and enchants with every tale released. Continuing to develop and expand on her storyline, Noni is adding new layers and dynamics to the story. Alex’s trip to the past allowed us to explore some of the Medoran characters as we never have before and I now appreciate them in a different way, especially Roka, Zain and Nyx who might have possibly become my new favourite character!

Introducing readers to the land of Draekora was also an exciting experience and I’m crossing my fingers we’ll have the opportunity to see more of the draekons as well in future stories. I adored meeting Xira and thought his bond with Alex was sweet. Alex, whose voice still remains strong and compelling and who is a powerful female lead, capable but down to earth.

Though I’ve heard some mention that Draekora was a “filler tale”, I disagree as I really thought Draekora brought something new and exciting to the series. We get to know Roka, Kyia, Nyx and even Aven like never before and I thought it was highly enjoyable seeing them interact with Alex in a different light.

Racing to another climactic ending, Draekora leaves me really excited for more. Personally I missed some of the Akarnae students and teachers in this instalment *cough* Kaiden  *cough* but I can’t wait to see what Lynette Noni does with this series next and will be hanging out until the fourth book is released!