Book Shelf: All the Stars Left Behind by Ashley Graham 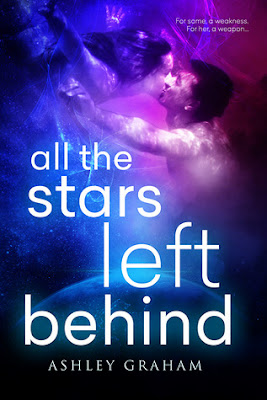 Relocating to Arctic Norway would put a freeze on anyone’s social life. For Leda Lindgren, with her crutches and a chip on her shoulder the size of her former Manhattan home, the frozen tundra is just as boring as it sounds. Until she meets her uncle’s gorgeous employee.

Unfortunately, no matter how smoking hot the guy is, Roar comes with secrets as unnerving as his moving tattoos. And Leda doesn’t trust him.

Roar shouldn’t be drawn to the moody human girl with eyes that leave him weak in the knees. But when Leda gets shot by one of his enemies and survives, Roar finally understands why he’s drawn to her: Leda is exactly what he was sent to Earth to find. A weapon of immense power capable of saving his planet.

She just doesn’t know it yet.

All the Stars Left Behind is Ashley Graham’s debut novel and is a rich intergalactic sci-fi novel that will appeal to fans of Jennifer L. Armentrout’s Lux series with its romance, action and characterisation.

After the recent loss of her father, Leda Lindgren finds herself relocating to Norway to live with her estranged uncle and grandmother. Starting over in a new country would be hard for anyone, but with Leda suffering from spina bifida and a chip on her shoulder, this icy Arctic is far from a winter wonderland. Miserable and still grieving, everything changes for Leda when she meets her uncle’s gorgeous and mysterious employee, Roar. Entranced by Roar’s moving tattoos and drawn to him for reasons she can’t understand, Leda knows there’s more to Roar than meets the eye. Roar knows the last thing he should be thinking about is the beautiful but sad human girl he can’t seem to get out of his head. Part of a small group sent from his home planet of Aurelis to Earth in an effort to find a weapon capable of saving his people from a relentless enemy, Roar has a duty to his crew and his mission to find the weapon whatever the cost. Yet when it comes to light that Leda is the weapon Roar has been searching for, will his desire to be with her stop him from doing what has to be done? And Leda be able to accept her destiny to save an entire alien race?

Launching readers into a sci-fi YA full of aliens, romance and action, All the Stars Left Behind was an easy to read tale that unfolded well and managed to tick all the boxes. Ashley Graham won me over with the intriguing space world she created and the way she wove the characters and their relationships with each together.

I liked the characters within the story from Leda and Roar to Leda’s uncle and grandmother to Roar’s teammates Oline, Petrus and Stein. They complimented each other well and supported the story. Without giving away any spoilers, I have to say I was really surprised and intrigued by one revelation revolving one of Roar’s teammates and am keen to see what Ashley Graham does with this in the future.

Admittedly I did struggle early on with the fast, intense way that Leda and Roar fell for one another and the power behind their feelings. It just seemed to come on too fast, too strong for my likings to be believable. That being said, there was a reason behind this intensity that was explained by Graham as the novel progressed. Who and what they were had an impact on the attraction they felt and as such it went a long way to support the intensity of their feelings. Personally I’m just over insta-love and can’t stand to see these in books nowadays as I feel it cheapens and lessens the romance.

The ending of All the Stars Let Behind seemed a little anti-climactic and forced for my taste—too easy if I’m being honest. I’m not sure if this tale is meant to be a standalone or part of a series as All the Stars Left Behind ended in a way that could have been either. Personally I think Ashley Graham should explore the world a bit more and I’ll be looking for updates on future books.

Overall, for a few issues I had with All the Stars Left Behind, I did enjoy it. It was a solid read with a beautiful cover that entranced and entertained. I’m keen to see what Ashley Graham does next and will be keeping my eye out!